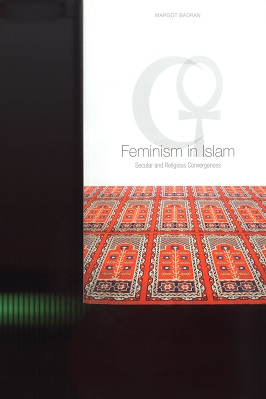 Feminism in Islam – Secular and Religious Convergences by Margot Badran

Feminism in Islam has become the focus of intensified academic interest as well as a topic of public concern on an unprecedented scale in recent years. Concurrently, it remains the subject of confusion and contention, and of considerable ignorance, both within and beyond Muslim communities in the East and West.

Feminism in Islam has long been presumed non-existent by most in the West, who have insisted that “feminism and Islam” is an oxymoron. In their view, Muslims were incapable of producing feminism, and “Islam» itself would not allow it.

In “the East,” a term still commonly used in the early twentieth century to refer to Islamic and other societies in Africa and Asia, most Muslims have pronounced feminism produced by women in their midst an anathema.

Feminism to such opponents served, so they insisted, as another form of western assault upon their culture, and constituted a blasphemy to religion. Many in the West, on the other hand, have used the trope of the “oppressed Muslim woman,” a set piece in Orientalist discourse, displaying a feigned con­cern for “her” plight, in order to justify colonial and neo-colonial incursions into Muslim societies, or simply to make a show of arrogant superiority.

When Muslim reactionaries, whether in the East or West, sustain repressive patriarchal versions of Islam to maintain control of women and to perpetuate the conventional hierarchical order- and with this their own power and privilege – they concurrently solidify Western stereotypes.

Thus, we note that Westerners attack Muslims by belit­tling the very notion that they could generate feminism of their own, and in so doing denigrate Islam as inherently gender-unjust, while many Muslims (playing into their hands) attack the West for foisting 2 Feminism in Islam

At the outset, it should be made clear as history and empirical research attest – that the feminisms Muslim women have created are feminisms of their own. They were not “Western;” they are not deriv­ative. Religion from the very start has been integral to the feminisms that Muslim women have constructed, both explicitly and implicitly, whether they have been called “secular feminism” or “Islamic femi­nism.”

This is in contrast to feminisms in the West, which have been largely secular enterprises in the sense of being typically articulated outside religious frameworks. Yet those Westerners who believe sec­ularism-in the sense of moving beyond religion, or even assuming an anti-religious stance – to be a sine qua non of feminism forget the role religion has played in their own feminisms.

To cite American experi­ence, they ignore their forebears who produced the Woman’s Bible in the mid-nineteenth century and the Jewish and Christian religious studies scholars who created women’s liberation theology in the late twentieth century.

In the main, however, feminism in the West has been cast within a secular framework and has neither explicitly invoked religious principles nor looked to religion for support or legitimacy.

I note that Islamic feminism speaks, actually or potentially, to society at large, while Christian and Jewish liberation theology is a form of feminism that for the most part speaks to the concerns of the few.

Historically, Muslim women have generated two major feminist paradigms, which they have referred to as “secular feminism” and «Islamic feminism.” It is important to immediately observe, however, that these two feminisms have never been hermetic entities. Nor, con­comitantly, have those known as “secular feminists” and “Islami, feminists” operated strictly within the separate frameworks that the designations of the two feminisms might suggest.

century through the first half of the twentieth, during processes of modernization, nationalist anti-colonial struggle, dynastic decline, and independent state-building. Islamic feminism emerged in the global umma (Muslim community) simultaneously in the East and West, in the late twentieth century during the late postcolonial moment.

Islamic feminism appeared, as well, at the time of an accel­erating Islamist movement, or movement of political Islam – and, in the case of Iran or, later, Sudan, following the installation of an Islamic regime – as well as during widespread Islamic religious cul­tural revival in many Muslim-majority secular states and minority societies.

Concomitant with these phenomena have been new waves of modernization experienced by more modest economic segments of urban and rural populations. Secular feminism emerged as a com­posite of intersecting secular nationalist, Islamic modernist, and humanitarian (later human rights) discourses, Secular feminism signified a model of feminism located within the context of a secular territorial nation-state composed of equal citizens, irrespective of religious affiliation and a state protective of religion while not offi­cially organized around religion.

From the beginning, secular femi­nism has been action-oriented, engaging in social and political militancy. Indeed, it emerged as a social movement – or, more pre­cisely, social movements within national contexts, although, as evi­dent in the Middle East, they were also transnational, notably in a regional sense.1

Islamic feminism, by contrast, burst on the global scene as a new discourse or interpretation of Islam and gender grounded in ijtihad, or independent intellectual investigation of the Qur’an and other reli­gious texts. The Islamic or religious, framing of this new feminism did not mean that “the secular” in the sense of worldliness was absent.

This new critical thinking was understood by its shapers from the outset as linked, of necessity, to paving the way for gender liberation and social change in particular contexts. Its concern has not been simply a reli­gious and societal reform but a fundamental transformation reflecting the practice of an egalitarian Islam, as I discuss in chapter 14.

The two feminisms, secular feminism, and Islamic feminism have approached gender equality differently. Emergent secular feminism insisted upon the implementation of gender equality in the public sphere while acquiescing in the notion of gender complementarity in the private sphere or the domain of the family. This was in keeping with the late nineteenth- and early twentieth-century Islamic

PURDAH AND THE STATUS OF WOMEN IN ISLAM pdf download

THE ROLE OF RELIGION IN MARRIAGE AND FAMILY COUNSELING pdf download

IRAQI WOMEN UNTOLD STORIES FROM 1948 TO THE PRESENT pdf download

Feminism, Islamic Politics
👉 Click to load all books of Feminism