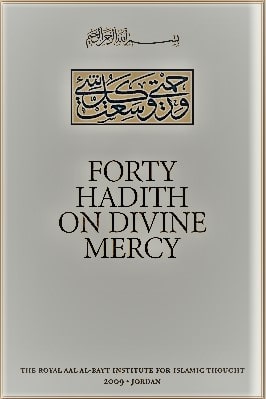 From the book: In his famous book of forty hadith, Imam Nawawi (d. 676 A.H./1277 C.E.) relates that the Messenger of God said, “Whosoever commits to memory for my ummah (religious community) forty traditions concerning religion will be resurrected by God in the company of the jurists and the learned.”

In other versions, it is said that the Prophet will be “an intercessor and witness” for such a person, or that they will be allowed to enter Paradise from any gate they wish, or that “they shall be recorded amongst the ranks of the jurists and resurrected in the company of the martyrs”.

Now, the scholars of hadith are in agreement that this tradition is weak, yet many of them have composed books of forty traditions, the most famous of which is Imam Nawawi’s.

In doing so, they have based themselves on other more authentic hadith, such as, “Let he who is present pass on to the one who is absent, for indeed the one who is present may pass on to one who will pay greater heed than he,” (Sahih al-Bukhari no. 67, Kitab al‘Ilm) and, “God prospers the man who hears what I say, takes heed of it, commits it to memory, and passes it on.

Indeed, it may be that he bears understanding to one whose under- standing is greater than his own.” (Sunan al-Tirmidhi no. 2870, Kitab al-‘Ilm)

The learned scholars of Islam have composed books of forty traditions on a wide range of themes, such as jihad (struggle), comportment (adab), or the sacred sayings (hadith qudsi, or words of the Prophet which quote God speaking, but are not part of the Quran and are not wahy or revelation).

In a humble effort to be faithful to this tra- dition of collecting and publishing forty traditions of the Prophet, this book takes as its theme the subject of di- vine mercy, which comes from God and manifests in His Prophet and His religion.