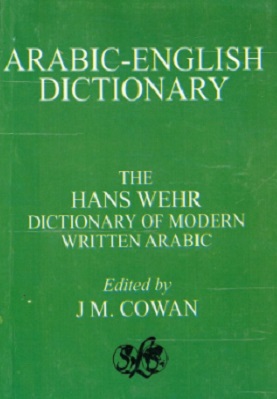 This dictionary presents the vocabulary and praxeology of modem written Arabic. It is based on the form of the language which, throughout the Arab world from Iraq to Morocco, is found in the prose of books, newspapers, periodicals, and letters. This form is also employed in formal public adders, over radio and television, and in religious ceremonial. The dictionary will be most useful to those working with writings that have appeared since the turn of the century.

The morphology and syntax of written Arabic are essentially the same in all Arab coun­tries. Vocabulary differences are limited mainly to the domain of specialized vocabulary. Thus, the written language continues, as it has done throughout centuries of the past, to ensure the linguistic unity of the Arab world. It provides a medium of communication over the vast geographical area where numerous and widely diver86′ local! dialects it Transends. Indeed, it gives the Arab people of many countries a sense of identity and an awareness of their common culture heritage.

Two powerful and conflicting forces have affected the development of the modern Arabic lexicon. A reform movement originating toward the end of the last century in Syria and Lebanon h&8 reawakened and popularized the old conviction of educated Arabic that the ancient ‘Arabiya of pre-Islamic times, which became the classical form of the language in the early century of lslam, is better and more correct than any later form.

Proponents of this pruritic doctrine have held that new vocabulary must be derived exclusively in accordance with ancient models er by semantic extension of older forma. They have insisted on the replacement of all foreign loanwords with purely Arabia forms and expressions.

The purists have had considerable influence on the development of modern literary Arabia although there has been widespread protest against their external point of view. At the same time and under the increasing influence of Western civı1ization, Arab writers and journalists have had w deal with a host of new concepts and ideas previously alien to the Arab way of life.

As aotua1 usage demonstrates, the purists have been unable to cope with the sheer bull of new linguistic material which has had to be incorporated into the language to make it current with advances in world knowledge. The result is seen in the tendency of many writers, especially in the fields of science and technology, simply to adopt foreign words from the European languages.

THE TEACHING AND LEARNING OF ARABIC IN EARLY MODERN EUROPE pdf

👉 Click to load all books of Arabic language  Dictionary