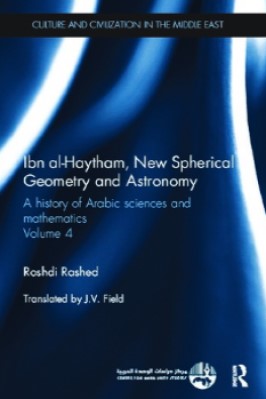 About the Book – IBN AL-HAYTHAM NEW ASTRONOMY AND SPHERICAL GEOMETRY

This volume provides a unique primary source on the history and philosophy of math- ematics and science from the mediaeval Arab world.

The fourth volume of A History of Arabic Sciences and Mathematics is complemented by three preceding volumes which focused on infinitesimal determinations and other chapters of classical mathematics.

Including extensive commentary from one of the world’s foremost authorities on the subject, this fundamental text is essential reading for historians and mathemati- cians at the most advanced levels of research.

Roshdi Rashed is one of the most eminent authorities on Arabic mathematics and the exact sciences. A historian and philosopher of mathematics and science and a highly celebrated epistemologist, he is currently Emeritus Research Director (distinguished class) at the Centre National de la Recherche Scientifique (CNRS) in Paris, and is the former Director of the Centre for History of Medieval Science and Philosophy at the University of Paris (Denis Diderot, Paris VII).

Under the rule of the Caliph al-Ma’mºn (813–833), research in astronomy was pursued with a vigour without precedent since second- century Alexandria. One of the characteristics of this new beginning is that it occurred both in mathematical astronomy and in observational astronomy at the same time. In the early part of this period we find such illustrious figures as al-Fazærî, YaÌyæ ibn Abî ManÒºr, al-Farghænî and Îabash, among many others.

That is a historical fact, known and described by historians. But it has not been sufficiently emphasized that this intense activity set other activities in train, among them research work on instruments, and in particular on instruments that could be used by astronomers.

The testimony provided by the tenth-century biobibliographer al-Nadîm is eloquent on the matter. Reading the entries in al-Fihrist that he devotes to the astronomers from the ninth century onwards, we may remark that the great majority of them did work on astrolabes, or on sundials, or on the armillary sphere, or on more than one of these types of instrument.

Al- Nadîm himself points out that there is a close connection between progress in research in astronomy, notably in observational astronomy, and the study and making of instruments. He writes:

The domain of makers (of these instruments) has become larger under the Abassid State from al-Ma’mºn up to our own time <end of the tenth century>. When al- Ma’mºn wanted astronomical observations to be carried out, he turned to Ibn Khalaf al-Marwarrºdhî, who constructed for him an armillary sphere that is in the keeping of certain scholars in our land; al-Marwarrºdhî also constructed an astrolabe.1

There is a long list of astronomer mathematicians who, from al-Fazærî onwards, wrote on this subject. We find it in al-Fihrist and in the biobibliographical books old and modern that derive from it.2

All we need to say here is that these astronomer mathematicians formed an established tradition. But there was another tradition that ran alongside it, one that can be identified through the names of authors and the titles of their books, a tradition to which al-Nadîm gave its own separate title: ‘instruments and their makers’.

For the moment, the titles and contents of works help us to identify some of its characteristics. Some books deal with the art of constructing the instrument and using it;

others describe how the instrument is used, with a fairly short explanation of the rules governing the way it works; others deal with the theory of the instrument and set out the mathematical proofs required; finally, others take this as an occasion to develop mathematical tools.

Thus many books about the astrolabe are of the first two types, whereas al-Kæmil by al-Farghænî is of the third type, since the author, a mathematician, begins it with a rigorous study – the earliest we know – on the subject of stereographic projection.

As for the last type, it is represented by al-Qºhî and by Ibn Sahl, who started from the astrolabe and went on to develop a serious study of projections, in which stereographic projection is merely one example. Even from this rapid description, it is obvious that a dialogue has been set up between research on instruments and on mathematics, and that it is a dialogue the historian should not neglect.

The study of sundials has the same history as that of astrolabes. In the ninth century, scholars as distinguished as al-Khwærizmî, Îabash, Banº al-∑abbæÌ, al-Farghænî, Thæbit ibn Qurra and, later on, al-Mæhænî wrote about sundials and their use. But there is every indication that it was only with Ibræhîm ibn Sinæn (296/909–339/946) that the first substantial text on sundials appeared. Ibn Sinæn sets out a theory of sundials that is solidly based in geometry.3

As for the astrolabe, the mathematical study of sundials also became a discipline in which specialists (aÒÌæb al-aÂlæl) were, as Ibn al-Haytham says, identified by a special name, and the specialist artisans were recognized as such.

This literature on sundials was already substantial by the end of the ninth century and the beginning of the tenth, notably in including Ibn Sinæn’s book.4 Together with the body of craftsmen who constructed sundials, it constituted the starting point for Ibn al-Haytham. First, let us….

Avicenna and His Heritage: Acts of the International Colloquium pdf download