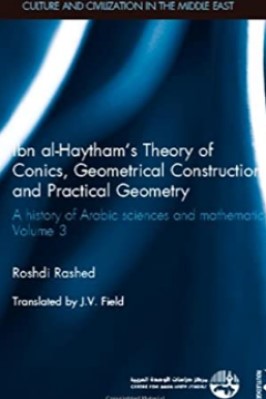 About the Book – IBN AL-HAYTHAM’S THEORY OF CONICS, GEOMETRICAL CONSTRUCTIONS AND PRACTICAL GEOMETRY

This book provides a unique primary source on the history and philosophy of mathematics and science from the medieval Arab world. The present text is complemented by two preceding volumes of A History of Arabic Sciences and Mathematics, which focused on founding ﬁgures and commentators in the ninth and tenth centuries, and the historical and epistemological development of ‘inﬁnitesimal mathematics’ as it became clearly articulated in the oeuvre of Ibn al-Haytham.

This volume examines the increasing tendency, after the ninth century, to explain mathematical problems inherited from Greek times using the theory of conics. Roshdi Rashed argues that Ibn al-Haytham completes the transformation of this ‘area of activity’ into a part of geometry concerned with geometrical constructions, dealing not only with the metrical properties of conic sections but also with ways of drawing them and properties of their position and shape.

Including extensive commentary from one of the world’s foremost authorities on the subject, this book contributes a more informed and balanced understanding of the internal currents of the history of mathematics and the exact sciences in Islam, and of their adaptive interpretation and assimilation in the European context. This fundamental text will appeal to historians of ideas, epistemologists and mathematicians at the most advanced levels of research.

Roshdi Rashed is one of the most eminent authorities on Arabic mathematics and the exact sciences.

A historian and philosopher of mathematics and science and a highly celebrated epistemologist, he is currently Emeritus Research Director (distinguished class) at the Centre National de la Recherche Scientiﬁque (CNRS) in Paris, and is the Director of the Centre for History of Medieval Science and Philosophy at the University of Paris (Denis Diderot, Paris VII).