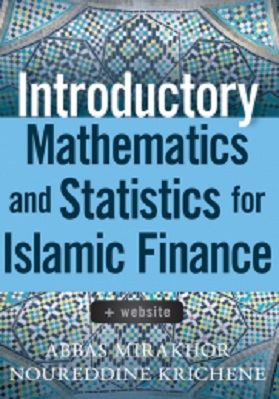 It will be therefore necessary to provide a homogenous quantitative training in mathematics and statistics for students, with a view to enhancing their command of the theory and practice of Islamic ﬁnance.

In view of the nature of Islamic ﬁnance, students or professionals should acquire adequate skills in computational mathematics and statistics in order to accomplish their duties in any ﬁnancial or nonﬁnancial institutions where they might be employed.

Without computational skills, students or professionals may not be able to manipulate economic and ﬁnancial data; they may not meet the challenges of their ﬁnancial career. In fact, the ﬁnance industry has reached an extremely advanced stage in terms of the quantitative methods, computerization, product innovations, and arbitrage and trading programs that are used.

Many institutions such as hedge funds, pension funds, investment corporations, insurance companies, and asset management companies require advanced knowledge in actuaries, and models of investment and risk management. Professionals have to satisfy the standards required by these institutions and be able to use software, such as Microsoft Excel, EViews, Mathe- matica, MATLAB, and Maple, to process data and carry out computational tasks.

The Internet is rich in the use of computational tools. A student can plug in data and get instantaneous answers; however, it is important for a student to understand the theory underlying the computational procedures.

While existing books on ﬁnance cover the topics of mathematics or statistics only, this book covers fundamental topics in both mathematics and statistics that are essential for Islamic ﬁnance. The book is also a diversiﬁed and up-to-date statistical text and prepares students for more advanced concepts in mathematics, statistics, and ﬁnance.

Although most of the mathematical and statistical books concentrate on traditional mathematics or statistics, this book uses examples and sample problems drawn from ﬁnance theory to illustrate applications in Islamic ﬁnance. For instance, a student will be exposed to ﬁnancial products, asset pricing, portfolio selection theory, duration and convexity of assets, stock valuation, exchange rate pricing, and efﬁcient market hypothesis. Examples are provided for illustrating these important topics.

The same approach is applied in statistics; the book covers basic concepts in probability theory, such as events, probabilities, and distributions, and advances progressively to econometrics, time series analysis, and continuous time ﬁnance. Each chapter is aimed at an introductory level and does not go into detailed proofs or advanced concepts.

The questions at the end of each chapter repeat examples discussed in the chapter and students should be able to carry out computations using widely available software, such as Excel, Matlab, and Mathematica, online formulas, and other calculators. Internet presentations that illustrate many procedures in the book are also available. The successful resolution of these questions means that a student has a good understanding of the contents of the chapter.

Sampling theory is a study of the relationship existing between a population and samples drawn from the population. It is useful in estimating unknown population parameters such as population mean μ and variance σ2 from knowledge of corresponding sample mean and variance, often called sample statistics. Sampling theory is also useful in determining whether the observed differences between two samples are due to chance variation or they are really signiﬁcant.

The analysis of differences in samples involves the formulation of hypotheses and applications of tests of signiﬁcance that are important in the theory of decisions. In order for the conclusions of sampling theory and statistical inference to be valid, samples must be chosen so as to be representative of the population. One way in which a representative sample may be obtained is by the process called random sampling, according to which each member of a population has an equal chance of being included in the sample.

There is a close relationship between discrete time and continuous time analysis. Time series are stochastic processes deﬁned on discrete time intervals. More speciﬁcally, the observations were made at ﬁxed points in time such as at the close of the market, or end of the month, or every hour.

We study a continuous stochastic process in the same way as a time series. We try to characterize the probability law of the random variable, that is, the data generating process; then, we determine the mean and variance of the process. We use the process either to predict the future values of the variable, or to study risk, and price an asset. We examine how to transform a process into a risk-neutral, or equivalently a martingale, process in order to be able to use it for pricing.