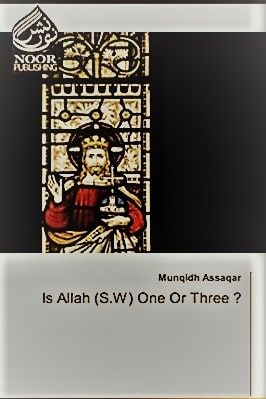 Is Allah One or Three

IS ALLAH ONE OR THREE

(Christ the son of Mary was no more than an apostle; many were the apostles that passed away before him. His mother was a woman of truth. They had both to eat their (daily) food. See how Allah doth make His signs clear to them; yet see in what ways they are deluded away from the truth!) (Holy Quran, 5: 75)

(He was no more than a servant: We granted Our favour to him, and We made him an example to the Children of Israel.) (Holy Quran, 43: 59)

(They say, “((Allah)) Most Gracious has begotten a son!” Indeed ye have put forth a thing most monstrous!

At it the skies are ready to burst, the earth to split asunder, and the mountains to fall down in utter ruin, That they should invoke a son for ((Allah)) Most Gracious.

For it is not consonant with the majesty of ((Allah)) Most Gracious that He should beget a son.

Not one of the beings in the heavens and the earth but must come to ((Allah)) Most Gracious as a servant.

He does take an account of them (all), and hath numbered them (all) exactly. And everyone of them will come to Him singly on the Day of Judgment.) (Holy Quran, 19: 88 -95)

These noble verses have summarized the Muslim’s concept, faith and belief in Allah1 (S.W)2, the One and only, and His prophet Jesus

1– Muslims prefer using the name “Allah”, which is one of many other beautiful names and it is God Almighty’s greatest name, instead of the English word “God”.

The word “Allah” is pure and unique unlike the English word “God”, which can be used in many forms.

If we add ‘s’ to the word “God” it becomes “Gods”, that is a plural of God. Allah is one and singular, there is no plural of Allah.

There is nothing like male Allah or female Allah. (taken from: “The Concept of God in Major Religions”, Dr. Zakir Abdul Kareem, pp 18) (Added by the proofreader)

2 – Muslims do not mention t he name of Allah without glorification. The letters “S.W” are contractions of the two Arabic words “Sobhanahu Wataala”, which means, “Glory to Him! He is high above all” (Holy Quran 17:43).

The English meaning of these two words is from the “Meaning of the Holy Quran by Abdullah Yusof Ali”.

Therefore, in this book I will use the words “Allah (S.W)” when referring to God Almighty, except for excerpts and quotations by the proofreader)