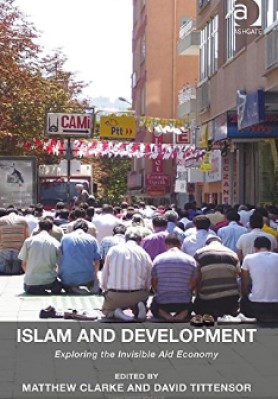 This volume addresses the nexus between Islam and the global humanitarian sector. It considers the role that faith plays in guiding Muslims with regard to charitable giving and how development projects are implemented on the ground from an Islamic ethical perspective. The impetus for such a volume derives from the fact that Islam is the worldâ€™s fastest growing religion, has a burgeoning aid sector, and continues to remain relatively misunderstood, particularly in the West.

Thus, the aim of this volume is to provide a more balanced and nuanced account of Islamic humanitarian activities, by exploring the theology, growth of the sector, and the uses to which Islamic aid is put. This volume is important therefore as it renders more visible the Muslim aid sector. Islam is often regarded as a violent religion that sees the world in an â€˜us versus the restâ€™ binary, and in more recent times Islamic charities have been implicated as pivotal actors in this struggle through funding acts of terror. Such perceptions constrain proper analysis and certainly entrench the invisibility of Muslim aid.

In other words, this volume seeks to provide a positive account that tells the often untold story that takes place on the margins of the mainstream aid sector, and in doing so, make Islamic aid practices more relatable.

This is not to suggest that the contributions in this volume are without criticism, quite the contrary. Rather, the hope is to show the potential for Islam to be a constructive addition to the aid arena and highlight the role that faith can play more broadly in the fight against poverty and inequality. For, in the aid sector, the role of religion has been a point of contention that is only beginning to be explored; a fact that perhaps places Islam at a double disadvantage.

The Current State of Play

An interest in the role of religion in development began to manifest within both the sector and academia during the 1990s with Jim Wolfensohn, the President of the World Bank from 1995 to 2005, seeking to introduce faith back into the development arena.

He brought together civil society, business and cultural institutions in a series of high-level meetings in 1998, 1999, 2002 and 2005 in an attempt to build links with communities of faith. This move culminated in country-level pilots to develop a joint approach to deal with issues such as HIV and AIDS.

An additional outgrowth from the 1999 meeting was the World Faiths Development Dialogue (WFDD), a small autonomous institution, which seeks to encourage dialogue about issues of poverty, diversity and equity, and has since conducted inter-faith interventions in Ethiopia, Guatemala, and Tanzania.1

This activism on the part of the World Bank and the WFDD has led both government agencies and academics to also examine the role that faith can play in development. In 2005 a consortium, funded by the Department for International Development (DFID), was formed between academic institutions in the UK, India, Pakistan, Nigeria and Tanzania, non-academic and non-government bodies, including Islamic Relief, to further explore the relationship between faith and development. As part of the research programme, the consortium sought to map the Muslim NGO sector in the UK.2

However, the mapping exercise proved a difficult one. It was found that obtaining information about the 56 organizations identified was not at all a formality, but on the contrary was time consuming and led to the endeavour being overtaken by other initiatives. In particular, the paper noted the following barriers to achieving a cohesive picture of the Muslim NGO sector in the UK:

•              The field is fluid and many organizations do not see that the contribution they make to relief and development places them within the sector.

•              Their work is underpinned by a different discourse to mainstream development which can preclude the majority of them from partnering with secular agencies and or public sector agencies;

•              Many Muslim NGOs, on account of their diasporic nature, see themselves as ‘mainstream’ in their country of origin as opposed to being part of the UK community; and

•              There is limited interaction between Muslim NGOs themselves due to competition and some actors being seen as having political inclinations.3

Basically, it was found that the Muslim NGO sector in the UK operates almost entirely on the margins of the mainstream development arena and is internally fragmented, and as a result, tends to go largely unnoticed.

These findings are not unusual. Indeed, these issues are widespread and affect the sector as a whole. A more recent report by IRIN also found that there is a distinct lack of co-ordination amongst Muslim NGOs, and that they are wary of working with Western agencies, such as the UN, because they see them as being politically motivated. As one senior aid worker put it: â€˜We try to coordinate with â€“ and not be coordinated by â€“ the UN because of neutrality issuesâ€™, because â€˜[t]he UN is not considered to be a neutral organization, especially in a conflict set-upâ€™.4

This lack of co-ordination and trust was partly caused by pre-existing misapprehension of Muslim charitable work within the West which was exacerbated by the advent of and fallout from 9/11. In a report by the CIA in 1996 it was asserted that one third of all Islamic charities and non-governmental organizations (NGOs) were directly or indirectly linked to terrorism,5 and in 2001, in the wake of 9/11 and the subsequent â€˜war on terrorâ€™, Islamic charities came under even greater scrutiny. Organizations that had largely remained unnoticed up until then were suddenly heavily scrutinized and subjected to incredible public pressure from government policies that became wide-reaching and increasingly repressive.

For example, in 2003 the US Congress called for a ban on a number of charities across the globe which saw the offices of the Saudi-based charity al-Haramain shut its doors in Bosnia, Somalia and Chad.6 Others, such as the al-Aqsa Foundation also had a chain  of its offices closed across Europe because of suspected links with Hamas, while major Western Islamic charities Interpal and Islamic Relief had to defend themselves against allegations of supporting terrorism.7 By 2009 the list of Islamic charities under suspicion had grown to 500.8