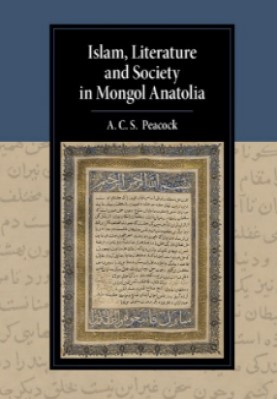 Crises of Legitimacy and the Struggle against Unbelief

Over the thirteenth and fourteenth centuries, Anatolia, previously a peripheral and isolated part of the dÄral-IslÄm, started to resemble more closely its Muslim neighbours, as its Muslim population grew and its infrastructure of buildings such as mosques, madrasas and zÄwiyas(Suï¬ lodges) developed. Although the founda-tions for this development were laid under the Seljuqs, paradoxically, this process of Islamisation in Anatolia was deepened and extended under non-Muslim rule.

With the hegemony of the pagan Mongols, many of the architectural and literary achievements that subsequently came to represent the apogee of Seljuq rule were undertaken, and investments by members of the Mongol bureaucracy and army as well as their allies in the puppet Seljuq administration transformed the face of Anatolian cities.

Simultaneously, the Mongols were themselves subject to a parallel process of Islamisation, as Islam spread among the Mongol soldiery and upwards, until the Ilkhan Ghazan himself converted at the end of the thirteenth century. Precisely at this juncture, Anatolia began to become detached from the political orbit of the Ilkhanate, although culturally and economically it remained closely bound up with it, and the domination of Central Anatolia by a dynasty founded by a former Mongol commander, Eretna, continued until 783/1381.

Towards the end of the fourteenth century, Anatoliaâ€™s political landscape changed as the Ottomans made substantial advances into Central Anatolia, even if these were temporarily set back by their defeat by the Central Asian conqueror Timur at the Battle of Ankara in 804/1402.

In this chapter I offer an overview of the Mongol impact on Anatolia, paying particular attention to two developments that were to be decisive in shaping the intellectual landscape of the fourteenth century â€“ the crisis of political legitimacy that Mongol rule precipitated and the introduction of a new political vocabulary based around the jihad against unbelief, which seems to have emerged in the context of Mongol rule.

To assess the transformative impact of Mongol rule, it is vital to understand what was there beforehand. I therefore start with a brief overview of political and intellectual life in Anatolia in the pre-Mongol period.

ANATOLIA UNDER THE SELJUQS: THE EMERGENCE OF AN ISLAMIC SOCIETY

The beginnings of Muslim rule in Anatolia are conventionally dated to the Battle of Manzikert in 463/1071 at which the forces of the Great Seljuq sultan Alp Arslan, ruler of Iran, Iraq and Central Asia, defeated the Byzantine Emperor Romanus IV Diogenes.1 For decades before the conquest, however, Turkish nomads originating from Central Asia had been penetrating and raiding far into Anatolia, which provided them with an ecology particularly suitable for their pastoralist lifestyle, in contrast to the aridity of much of the rest of the Middle East.

This process of westwards migration by the Turks, which is scarcely documented in the sources, was gradual, and into the Mongol period the Turkish population of Anatolia was being augmented with new arrivals from the East.2 Over the late eleventh and early twelfth centuries various Turkish-ruled polities emerged in Anatolia, such as the Danishmendid dynasty that dominated north-central and south-eastern Anatolia, the Saltukids, based in Erzurum in north-eastern Anatolia, and the MengÃ¼cekids of Erzincan and DivriÄŸi.

The most important were the Seljuqs of Anatolia, the foundation of whose state is dated to the capture of the Byzantine city of Nicaea in the west of the peninsula â€“ not far from the region that would also be the birthplace of the Ottoman state â€“ by Sulayman b. Qutlumush, a cousin of Alp Arslan, in 1081.

Forced from Nicaea by the First Crusade in 1096, the Seljuqs then established themselves in Konya (Byzantine Iconium), located in south-central Anatolia. Konya would become the leading political and cultural centre of Muslim Anatolia and had a special importance for the Seljuqs as their dynastic burial ground.3

The archaeological  record, which has admittedly only been inadequately exploited to date for this period, suggests that there was little widespread disruption; there is no consistent and unambiguous evidence for the large-scale destruction of settlements for instance.4

The disruption was, at least at ï¬rst, political rather than social or economic.

Initially, the Turks probably comprised a minor element in the population, constituting the ruling elite along with their accompanying nomadic followers. The sources point to a gradual separation between the nomadic Turks, or Turkmen, and the Seljuq rulers, who had themselves originally been nomadic chiefs, even if the dynasty maintained some connection to the nomads well into the thirteenth century.5 Urban Iranian immigrants seem to have accompanied the invaders from the start, according to inscriptions from late eleventh-century Nicaea.6 Yet our knowledge of this period is poor.

From the early period of Islam in Anatolia we have no local Arabic or Persian texts at all, nor even the names of lost works, and our knowledge of the eleventh and twelfth centuries is based almost entirely on sources produced by Christians in Greek, Armenian and Syriac.

It might be reasonable to assume then that Muslim intellectual life was negligible or non-existent, but the situation differed in Anatoliaâ€™s eastern peripheries. Our oldest Islamic manuscript from Anatolia, al-Akhawayn al-Bukhariâ€™s Hidayat al-Mutaâ€˜allimin ï¬â€™l-Tibb, a Persian textbook on medicine, comes from the Saltukid principality of Erzurum, and the manuscript was dedicated to the Saltukid ruler Diya al-Din in 510/1116 (Plate 1).7

The Saltukid land was not just in close proximity to the Caucasian amirates, which, after Central Asia, were one of the birthplaces of New Persian literature,8 but was itself tributary to the Seljuq sultanate of Iraq, whose sultansâ€™ names were mentioned on its coins in recognition of his suzerainty.9

Erzurum, then, may be in a rather different category from the Danishmendid and Seljuq states in Anatolia, which were not tributary to the Seljuq sultanate of Iraq â€“ indeed, relations between the Anatolian Seljuqs and their cousins were distinctly frosty.

Although the Danishmendids are claimed to have founded the ﬁrst madrasas in Niksar and Tokat, in the absence of epigraphic or textual support such a claim remains highly speculative.10

From the middle of the twelfth century, Islamic culture started to develop in the Seljuq lands, in particular during the reign of Kılıç Arslan II (r. 551/ 1156–588/1192). Fragments of a palace in Konya from this period survive, while construction began on the town’s congregational mosque, the Ulu Cami.11 It is in the later twelfth century that we have our ﬁrst evidence for original literary activity in Anatolia.

At the court of Kılıç Arslan, a certain Hubaysh-i Tiﬂisi (d. c. 600/ 1204), whose nisba suggests he was an immigrant from Tbilisi, composed several works, mostly in Persian – on dream interpretation, medicine, a Persian-Arabic dictionary, the Qanun al-Adab and a Qur’anic commentary.12

He also composed works dealing with the Qur’anic sciences, the Kitab Talkhis ‘ilal al-Qur’an,13 and the Persian Kitab Wujuh al-Qur’an, based on earlier tafsīrs by Tha‘alibi and Muqatil b. Sulayman, which survives in a single autograph copy made in Konya in 558/1163.14 Meanwhile, Ankara, which was the appanage of Kılıç Arslan’s son Muhyi al-Din, was home to a circle of Persian poets, a handful of whose rubā‘iyyāt have come down to us.15

The intellectual centre of Anatolia in this period, to judge by extant works and manuscripts, was not Konya but further east.16 Perhaps the earliest extant work from Anatolia, an Arabic compendium on materia medica entitled Taqwim al-‘Adwiya, was composed by a Maghrebi scholar, Ibrahim b. Abi Sa‘id al-Maghribi al-‘Ala’i and dedicated to a minor Danishmendid prince, Dhu’l-Qarnayn b. ‘Ayn al-Dawla (d. 557/1162), suggesting a probable place of composition of Malatya or Elbistan, the main centres of this branch of the dynasty.17 This work soon became