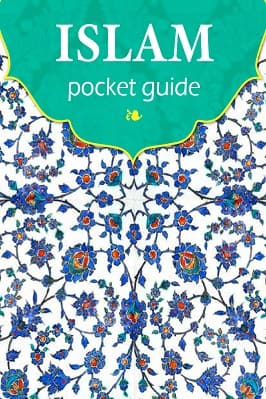 Everything in the universe—the sun, the moon, the stars—  have  all  completely  subjugated  themselves  to God’s  will;  they  cannot  make  the  slightest  deviation

from the path He has ordained for them. Similarly, all other elements in nature function in obedience to the laws of nature laid down for them by the Creator. The entire universe has surrendered to God, the Lord of the Universe.

To this end he has been given a thinking faculty, and a conscience with which to make moral judgements for himself.

He has the ability to accept and reject in order to follow certain principles in life. He is not bound by fixed laws like all other created beings. He has been given freedom of thought, option and action.

It is through this liberty of choice that man is being tested. But after being given a thinking faculty, a conscience and an ability to judge between good and bad ways, he was not just left to his own resources.

God did not just leave man in a world where there was no way to find the truth. Divine provision for him went much further than that. To see how God gave His guidelines to mankind, we have to go right back to the beginning of creation.

He took Adam, the first man— whom He had made not just an ordinary mortal but also a prophet—and taught him everything that He wanted from man, so that human beings would not be left without proper direction or guidance.

From time to time thereafter, He sent large numbers of prophets to the world—the last of these being the Prophet Muhammad—so that human beings, who tended to stray, could be recalled to the path of virtue.

Suppose we placed a pebble on a potter’s wheel, and then spun the wheel around very fast. The pebble would, of course, fly off, even although a potter’s wheel can hardly reach a speed of 25 miles an hour.

Now, just think for a moment that the earth we live on is also revolving but at a much faster rate than the potter’s wheel. Yet we do not fly off. The earth spins continuously on its axis at a speed of 1000 miles an hour—much faster than the average passenger plane— yet we move around on its surface, and live our daily lives without any fear of being thrown off like the pebble from the potter’s wheel. What a miracle this is.

The explanation scientists give us is that the earth pulls us with great force from underneath, while the pressure of the atmosphere from above pushes us firmly to the ground.

A force attracting us from below, and a five- “Islam” is an Arabic word which means “submission, surrender and obedience to God.” hundred mile thick blanket of air enveloping us from above are miracles enough in themselves, and to say that they explain our not flying off into space is to lend even greater credence to the miraculous nature of our entire world.

Everything in this world, is, in fact, a miracle. Just think what happens when we put tiny seeds into the ground.

The soil in which they are planted is uniform in constitution, but they bring forth a vast array of plants radishes, carrots, turnips, guavas, mangoes, mustard plants- everything indeed from the humblest blade of grass to the mightiest oak.

Each plant has its own distinct appearance, taste and fragrance, and, according to its species, gives certain benefits to mankind.

On all sides of us, a whole world of miraculous diversity and proportions stretches out before our eyes.

Moreover, at every instant, a great variety of life forms are continually coming into existence, quite unaided by man. Yet if all of the human beings in this world were to come together, they would not be able to create even one tiny grain of sand.

This all amounts to a miracle of such amazing proportions, that words fail us when we have to describe it. When we try to do so, we only degrade it, for we are unable to do justice to it with mere human words.

All we can do is look on in wonder, and ask ourselves: “Besides God, who could have made manifest such a miracle?”

Miracles All Around Us

Everything in this world is made up of atoms. In its final analysis, every object is a collection of these tiny particles.

Yet by some strange miracle, when these atoms come together in certain proportions, they form the dazzling globe of the sun, and when the same atoms accumulate elsewhere in different proportions they flow in cascades: in yet other places, they take the form of subtle breezes or are fashioned into fertile soil. All these things may be made up of the same atoms, but the nature and properties of each separate object are widely different.

This miraculous world provides man with endless resources which he puts to good use whenever he learns how to tap them.

Massive supplies of whatever he needs in life are constantly being accumulated, and man himself has to do very little in order to avail of them. Take, for instance, the food that he eats.

He has but to stretch out his hand for the huge quantities of valuable nourishment which, as part of the order of the cosmos, has been made available to him. Once he has it in his possession, all he has to move are his hands and his jaws so that the food should reach his stomach.

Then without any further effort on his part, the food is absorbed by the body and is turned into flesh, blood, bones, nails, hair and other parts of the human body.

All man has to do is to extract it from the ground, refine it, put it into his machines and, astonishingly, this liquid fuel keeps the entire mechanism of his civilization running smoothly.

Countless resources of this type have been created in this world, and there is enough of everything to meet man’s needs. Man’s part in bringing these things into being, or in changing them into some useful form, is a relatively small one.