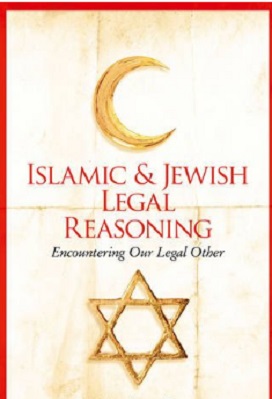 Islamic and Jewish Legal Reasoning: Encountering Our Legal Other

The story of this book reveals the sometimes-circuitous path that research can take, especially if the research does not adhere to certain orthodoxies on research, or if it is designed to do something whose ultimate end product is unpredictable. It began in the offices and homes of Anver M. Emon and Robert Gibbs in 2006 in and around the University of Toronto. Robert Gibbs had already written extensively on topics in Jewish philosophy and ethics.

Anver M. Emon was writing about various approaches to legal reasoning in Islamic law. They met in the Law Library and began conversations in the Philosophy of Law discussion group at the Faculty of Law, in which members from across the university would reflect on law, philosophy, and competing disciplinary approaches to the topic.

The conversation developed further when Emon went to Cambridge University to join Gibbs and others in the Scriptural Reasoning project, where scholars read the scriptural texts of multiple traditions with scholars from those different traditions.

These three moments remain central to the book before you. The most basic is the library. The contributors to this volume are academic scholars—people who read in the library, write books and articles for the library, and hold within themselves their own internal libraries that situate them as readers of other texts that they subsequently make their own. This project draws upon each contributor’s internal library, where each has a home.

The library as metaphor situates each of us in a tradition of law and scholarship that both informs our study but also limits what questions we ask and how we may go about answering them. As we inhabit our own internal libraries but also bring them into conversation with each other, we are confronted by their inherent limits—limits that become apparent only through this conversation.

Indeed, to read together as we did for five years, and even to write together, requires a new context where our libraries can intersect and reveal to us new insights not only about other traditions, but also (and most interestingly) about our own.

The second moment, the Philosophy of Law discussion group, provides a metaphor that frames the conversation between the internal libraries of the commentators in this volume and all those who joined us over the years in our workshop. Philosophy of law is not so much a common ground as a common site for discussion and for a truly wide range of approaches to questions about law.

In the specific Philosophy of Law group in Toronto, there were often participants who knew diverse legal traditions (e.g., common law, Jewish law, Islamic law, civil law, Roman law) and who had different philosophical heroes (e.g., Kant, Hegel, Levinas, Maimonides, Ibn Rushd). The practice was to read philosophical texts—sometimes current, sometimes historical— and to attend to the diverse perspectives brought to the group.

The social interaction was governed by conceptual interaction, based on reading philosophical texts. The contributors in this book were not participants in that weekly Philosophy of Law reading group, in large measure because they were not resident in Toronto, and both Gibbs and Emon over time withdrew from this specific law reading group, even though the task of this sort of interdisciplinary and philosophical engagement remained desirable. But that moment provided a third tra- dition of law that was implicitly in the room when Jewish and Islamic legal scholars convened together in discussion workshops. As much as the discussion among the scholars in this volume focused on Islamic and Jewish legal reasoning in the early texts of each tradition—we often joked that anything after 1500 C.e. was too young—scholars of both traditions could not escape the ever-presence of a legal order shaped by the modern state and characterized by secular models of law and governance.

Whether working from the Jewish legal tradition or the Islamic one, scholars of both traditions were keenly aware of the way both of these legal traditions were implicated in the ongoing development of statist regimes, whether as part of formal law or as a feature of public debate about the scope of accommodation of religious minorities such as Muslims, Jews and Christians.

The third moment, Scriptural Reasoning, served as a short-term catalyst for pursuing a different line of research and inquiry. Scriptural Reasoning began as a collaboration between Jewish, Christian, and Muslim scholars who convened (and many still do) semi-annually to read from each other’s holy scriptures together in small groups.

The virtue of Scriptural Reasoning—the focus on a narrow set of scriptural texts (Hebrew Bible, New Testament, Qur’an)—was also its vice for some scholars of Islam and Judaism who considered the sola scriptura model of Scriptural Reasoning as too indebted to a Protestant tradition to embrace the salient role of the interpretive tradition in Judaism and Islam. Each tradition has a signal place for these scriptural texts, which it holds to be revealed. But for both Jews and Muslims access to these texts is always through traditions of interpretation.

What would happen if the texts we read together stretched forward in interpretative history? Relatedly, Scriptural Reasoning often prioritized theology over and against other fields of inquiry, specifically the legal field that features so prominently in both Judaism and Islam.

Taking the three moments together, a new project came into focus. Because law is central in many historical and ongoing concerns about both Judaism and Islam, and given the richness of both centuries-long legal traditions, we hoped to frame a new practice of reading. Could the two traditions be read together without driving the interest in the discussions to reducing the two traditions to a common ground? At this point, the new project seemed to be best construed as a dialogue and not a three-part conversation, and Christianity was omitted.

Of course, there is a long tradition of canon law, but the centrality of law has been suspect within Christianity since its founding. Moreover, Christian theologians have tended to be interested in other worthy matters much more than law; and the political philosophers in the modern world, who descended from the Protestant Reformation, were largely unsympathetic to religion.

Indeed, this new project grew out of an interest to problematize both the post-Westphalian presumptions that inform debates in philosophy of law, and the category “religion” which is profoundly informed by Protestant traditions. Together these concepts of law and religion serve as assumptions that shape how the relationship between law, religion, governance, and religious pedagogy is construed for the deeply historical and yet also very contemporary religious traditions of Islam and Judaism.

Thus, when scholars of the two traditions convened, a third legal tradition—the secular liberal state and its philosophical tradition—was a tacit point of reference to the work to be undertaken.

The working title that emerged was “Reason and Authority.” The questions we addressed revolved around the general concern of the roles of reason and authority in interpreting and determining law in religious traditions. While the question of authority and reason arises in every legal culture, the Islamic and Jewish legal traditions offer explicit and extensive reflection on what reason is and how it can interpret sources in juxtaposition with both political and religious authority.

By looking at juristic and judicial practices, by following lines of interpretation that originate in revealed texts and flow through chains of multiple and evolving interpretations, the scholars discerned important relations between the authority of the revealed text and the reasoning of the community of scholars.

In interpreting legal matters, human reason is not only required, but also plays a contributing role in rationalizing, even in developing, the authoritative tradition. Indeed, the ideal is to discern the precise role of reason internal to the legal reli- gious traditions.

Thus each term of the title must undergo exploration.

Authority is not simply an end to debate and legal process, but is put to work in different ways and is discerned through different modes of inquiry. While both Islamic and Jewish law claim some form of divine authority for their tradition, each engages in complex negotiations with political and institutional authority. More to the point, however, each tradition articulates and contests claims of authority and so makes explicit for itself these questions about authority. Juxtaposing these accounts illuminates a more complex map of what authority is and how it is felt in the law.

Reason is far from being a simple or stable term. The reason of legal reasoning is not identical to what a philosopher would define as reason. Instead, juridical reasoning draws on specific texts, cases, precedents, principles, and pragmatic concerns associated with resolving very