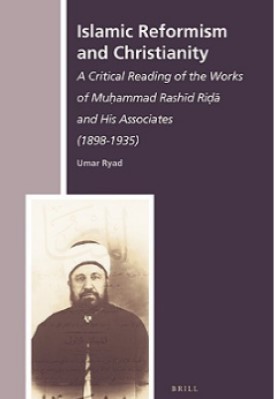 Islamic Reformism and Christianity: A Critical Reading of the Works of Muhammad Rashid Rida and His Associates (1898-1935)

Sources and Organization of the Study . 13

Riḍā’s Sources of Knowledge of the West: With Special

and the Egyptian Coptic Community . . 67

4.1. A Muslim Doubting the Authenticity of the Qurʾān 177

In Pursuit of a ‘True’ Gospel: Riḍā’s Arabic Edition of

Recapitulation of Ideas: Christianity as Reflected in Riḍā’s

the Cross for Christians . 303

The history of Christian missions has been written predominantly from a Christian, missionary perspective.1 Missions have scarcely been studied from the perspective of the people among whom missionaries worked, in the case of the present research: the Muslims in the Middle East in the early 20th century.

The available studies on the history of missions among Muslims are, in fact, incomplete, for they do not give detailed accounts of the reactions and interpretations of the people to whom the missionaries had been sent. Moreover, they do not tell us whether the missionaries themselves were aware of the Muslim reactive positions and writings, and the influence of their work on mutual Muslim-Christian perceptions and misperceptions. Main problems that still need to be examined are: How did Muslims, in various regions and under various circumstances, perceive the mis-sionaries and their work?

What ideas did Muslims develop about Christianity as they saw it enter Muslim societies? How did the direct encounter between Islam and Western Christianity through the emer-gence of missionaries in the Muslim world influence the Muslim polemics against Christianity?

The present work is a critical study of the dynamics of Muslim understanding of Christianity during the late 19th and the early 20th century in the light of the polemical writings of the well-known Syro-Egyptian Muslim reformist Sheikh Muḥammad Rashīd Riḍā (1865-1935) and his associates. It is observable that neither Muslim nor Western scholars paid due attention to his views on Christianity. No full-scale study of his perspectives on that subject has been undertaken so far. Although there are scattered and brief remarks in some individual studies on some of his works on Christianity, investigation is still needed by focusing on his polemics and answers to the social, political and theological aspects of missionary movements among Muslims of his age.

The base of our analysis in the present study encompasses Riḍā’s voluminous publications embodied in his magnum opus, the journal al-Manār (The Lighthouse). The core of these writings on the Christian beliefs and scriptures consisted of polemic and apologetic issues, which had already existed in the pre-modern Islamic classification of Christianity.

However, al-Manār polemicists have added to their investigations many modern aspects largely influenced by Western critical studies of the Bible. As a matter of fact, there is no documented public debate (munāẓarah) between Riḍā and his contemporary mis-sionaries. But al-Manār developed certain sorts of arguments drawn from critical studies about Biblical texts, church history, political con-frontations in the period of colonialism, and evidence of what it per-ceived as the wrong picture portrayed by missionaries (and some Christian Arabs) of Islam.2

As one of the most significant Muslim religious figures during the first half of the 20th century, the life of Riḍā, his journal and his reli-gious and political thought have been extensively studied (see bibli-ography). Biographical information on him is mostly taken from his autobiography, which he published more than thirty years after his migration to Egypt.3 His famous biography of his teacher Muḥammad ʿAbduh (1849-1905), Tārīkh al-ʾUstādh al-ʾImām, is also marked as one of the important sources for his life.4 By writing this work, Riḍā…..