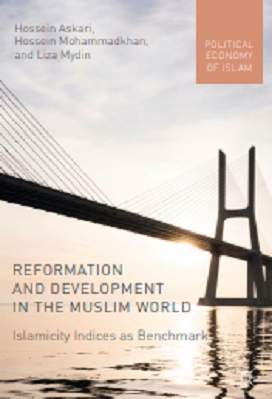 Reformation and Development in the Muslim World: Islamicity Indices as Benchmark

The Golden Age of Islam was the time when the Muslim community produced great physicians, scientists, philosophers and poets, with momentous advances in medicine, science, arts and commerce that brought Europe out of the Dark Ages and changed the course of his-tory for the better. While most historians bracket this period between the 632 and 1258, others suggest that the Golden Age of Muslim thinkers and inventors went well beyond this date and up to even the eighteenth century.

Regardless of the length of the period, the rich and fascinating history is today but a distant memory.1 Today, most humans around the world see little evidence of this rich history in their own day-to-day lives and much less so in the Muslim World from afar.

For us, Islam was at its peak during the life of the Prophet Mohammad (sawa); soon after his death, the helm of the religion, and in turn its practice, was hijacked by corrupt rulers and their courtiers; and what we see in the Muslim World today is the result of a long period of divergence between the teachings of the Qur’an (and its interpretation by the Prophet) and its practice by Muslims in the Muslim World.

The character and state of the Muslim World of the twenty-first century has little resemblance to the vision of the Qur’an and its interpretation and implementation by the Prophet.

Most recently, since 9/11, Islam has been viewed in an even more negative light, a negative light that grows exponentially with every terrorist attack in the West and with reports and pictures of Muslims kill-ing Muslims in terrorist warfare, civil conflicts, and wars. Populist parties and politicians are gaining supporters and ground in Europe and North

America by touting their Islamophobia and backing policies that prohibit Muslim immigration and refugees, and may go even further in the future by requiring special registration of all Muslims.

In the West, the words Islam and Muslim have become feared and are invariably associated with terrorism, other horrific acts, and backwardness. News headlines portray Muslims as zealots bent on fighting Christians and the West. Westerners show little understanding of what Islam preaches as the teachings of Islam have become distorted, resulting in an ever-growing divide between East and West. All the while the fundamental Islamic principles derived from the Qur’an and their interpretation and practice by the Prophet Mohammad (sawa) are rarely explained.

At their core, these teachings are the Unity of Allah’s Creation, the Divine gift of freedom to all humanity, love, peace, and social justice, as discussed in more detail in Chap. 2. Yet the image of Muslims (and of Islamic teachings) in the non-Muslim World is that of terrorists, jihad, backwardness, dictatorships, corruption, and injustice.

Frankly, we can-not blame some of these attributions when they are associated with some Muslims, as devout Muslims also see a failure of Muslim communities and their governments (rulers) to follow the rules that are foundational to a flourishing Muslim community. Instead, what we see in much of the Muslim World has little, if anything, to do with Islam and what Islam preaches.

A quick glance across the Muslim World does not convey a pretty picture. Most Muslim rulers are oppressive, corrupt, and unjust. While Muslims must take the ultimate blame for not holding their rulers accountable and for the scaffolding and landscape of their communities, the West should also recognize its complicity in backing some of the same rulers and propping up their oppressive rule. Since 2011, we have witnessed the horrific fruit of decades and centuries of illegitimate rule.

Bashar al-Assad has been embroiled in a civil war in Syria, with fall-out that is our generation’s ultimate breakdown of humanity. Since the conflict began in 2011, the death toll by the end of 2016 was approach-ing 500,000 and with more than a million injured and over 12 million Syrians displaced from their homes.2 Simultaneously we witnessed the uprisings of the “Arab Spring” against other leaders who had established decades of unjust and corrupt rule, including those against Tunisian Zine El Abidine Ben Ali, Libyan Muammar Gadhafi, the Al-Khalifas of Bahrain, and the Egyptian Hosni Mubarak.3

The uprisings in Muslim countries show no clear path to a better future, but instead point to mounting damage to the image of Islam as a religion, a religion that preaches and emphasizes freedom, peace, unity, and justice, and to a growing deterioration of Christian–Muslim relations, which could take centuries to reverse.

The uprisings in Muslim countries are taking an all too familiar pattern of oppressive governments mobilizing heavy military force to prevent peaceful protests and political reforms with foreign powers assisting their favorite dictator or opposition group in the name of “stability,” but in reality to preserve their selfish short-run interests. Such settings provide an ideal breeding ground for more rampant terrorist activity; mass civilian casualties, in turn accelerating the downward spiral of Muslim societies and pushing them to unimaginable depths.

Simply look at today’s Iraq, Syria, and Libya to see how these countries have been devastated into countries of 50 or 100 years ago and what may be in store for other oppressive and unjust Muslim lands. The catastrophic physical, political, social, and economic break-down of these societies will have a lasting impact that will transcend our generation and many generations to come.

Islam is at risk. Selfish individuals and groups, Muslims and even non-Muslims, use the religion as a nexus to gain power. The jihadists distort Islam into a violent and extreme form as the vehicle for the violent over-throw of corrupt and unjust rulers and the expulsion of their Western backers from Muslim lands. Clerics, military leaders, family rulers, and illegitimate governments wrap themselves in a customized version of Islam to assert their oppressive rule and solicit the backing of the great powers.

Such rulers prohibit discussion and debate of the meaning of Islamic teachings in their quest to promulgate a subservient society—one that will not question state-sanctioned doctrines. The teaching of Islam has become institutionalized to the mechanical, with great focus given to the five pillars of Islam—testimony of faith (Shahadah), daily prayers, Hajj pilgrimage, fasting in the month of Ramadan, and contribution to the needy to purify wealth—all of which are directed toward the Muslim as an individual and not to Muslims as a community.

Of equal import, but considerations that most Muslim governments neglect to take into account, are duties of a Muslim toward furthering the Unity of Creation and creating just societies. The capstone rule in Islam assigns Muslims the duty to collectively enjoin the good and forbid what is evil, or any wrongdoing as outlined in Surah Al-Imran, Verse 104 of the Qur’an:

And from among you there should be a party who invite to good and enjoin what is right and forbid the wrong, and these it is that shall be successful

It thus becomes the primary interest of corrupt Muslim rulers to actively impede the emergence of effective Islamic institutions and opposition parties for the continuation of their unjust, absolute and un-Islamic rule. Effective institutions, freedom that Allah (swt) gave as a gift to human-ity that no man should take away, rulers who are accountable to the community, and just distribution and redistribution of resources that are some of the hallmark teachings of the Prophet (sawa) during the Medinan period, are all but a mirage today.

Most Muslim societies of the twenty-first century operate within a framework that could not be further from the teachings outlined in the Qur’an and practiced by the Prophet. Muslim countries of today can-not be even compared to the Muslim World that brought peace, crea-tivity, and innovations over a thousand years ago, let alone compared to the ideal society that the Prophet led in Medina. We contend that Muslim governments largely operate within the scaffolds of un-Islamic practices despite promulgating Islam as their official state religion. We can place corrupt Muslim rulers of today into two groups: the extreme and less extreme. The extreme are Muslim rulers who promulgate dra-conian regimes and are unjust. The less extreme are the corrupt and non-transparent rulers who squander their nation’s wealth through their opulent lifestyle.

No matter at which end of the spectrum a Muslim ruler operates, it is undeniable that social progress and rapid and sus-tainable economic growth cannot be achieved in the contours of illegiti-mate, weak, and unstable political regimes. In saying so, we believe that Muslim societies are most vulnerable because their governments have the lowest rankings in political indicators; they show little respect for human rights; their legal system is unjust with little recognition for the rule of law; and resources and opportunities are highly skewed in favor of a few.

Muslim countries desperately need effective institutions that embody Islamic teachings and values. Our continuing work in the field of “Islamicity Indices” is centered on providing and demonstrating the evidence to support this argument. We break down each Muslim country by the tapestry of its political, social, human, and economic conditions, compare their success and failures to non-Muslim countries, and assess