Home » Maariful Quran All in one (8 Volumes) pdf DOWNLOAD 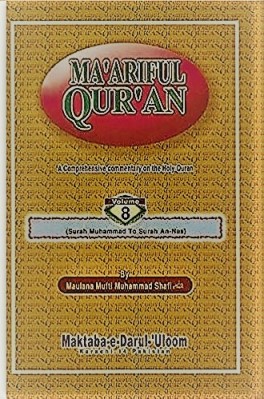 In 1954, Mufti Shafi Usmani was invited to give a weekly lecture on Radio Pakistan to explain selected verses of the Holy Quran.

The author accepted the invitation on the condition that he would not receive any remuneration in return and that his speech would be broadcast without the intervention of any authority.

The title of this weekly program was Maariful Quran (Knowledge of the Holy Quran) and it was broadcast every Friday morning on the network Radio Pakistan.

This series of lectures continued for ten long years until June 1984.

The new authorities then shut down their most popular program. This series of lectures discuss in detail the selected verses from the beginning of the Holy Qur’an to Surah Ibrahim (Surah No. 14).

This weekly program of Radio Pakistan was warmly welcomed by Muslims all over the world.

Thousands of Muslims listened to it not only in Pakistan, and India but also in Western and African countries. After the event closed, there was a flood of requests around the world to transfer the series in book form and to complete the rest of the Holy Qur’an in regular commentary form.

These requests prompted the esteemed author to revise these discourses and add passages that were not included in the original discourses.

He started this project in 1974 and started revising Surah Al-Baqarah.

However, due to his numerous engagements, he had to stop this work and it remained unchanged for the next five years.

In 1989, the respected author suffered from several ailments that confined him to his bed.

During this illness, he resumed this work while in bed and completed Surah Al-Baqarah in the same condition.

From then on he devoted himself to the “Maariful-Quran”. Despite many adversities, he continued to work and completed the work in eight volumes (about seven thousand pages) in just five years. [5]

Structure of the Maarif Quran Commentary

The book is divided into 6 volumes. A detailed introduction at the beginning of the first volume and some basic topics of the Qur’an are included. Notable among these are:

SOME CONTENTS of MAARIFUL QURAN BOOK

Since the Holy Qur’an was revealed to our beloved prophet Sayyidna Muhammad al-Mustafah by means of Wahy (revelation), an understanding of some particulars about Wahy is imperative at the very outset.

The need for Wahy

Every Muslim knows that Allah Almighty has sent a man into this world as a matter of test, and in return for his being obligated with certain duties, the whole universe has been placed at his service. For this reason, man, once he is in the world, must do two things:

For these two functions, man needs knowledge. Therefore, unless he knows the reality of this world, the properties of different things, and the manner in which they can be put to use, he cannot use anything in this world to his advantage. Likewise, unless and until he knows the will of Allah Almighty as to what pleases Him and what displeases Him, it will be impossible for him to lead a life in line with the will of Allah Almighty.

So Allah Almighty, along with the creation of man, has created three things through which he could continue receiving the knowledge of the above-mentioned matters of concern. These are Man’s senses, that is, the eyes, the ears, the nose, the mouth, the hands, and the feet.

Consequently, man finds out many things through his senses, many others through reason, and the knowledge of things he cannot get through these two sources is bestowed upon him through Wahy.

The arrangement between these three sources of knowledge is such that each one has its limits, and a particular sphere of activity beyond which it does not work. In natural sequence, the knowledge of things man collects through his senses cannot be deduced through bland reason. For instance, you know by seeing a wall with your eyes that its color is white.

But, should you close your eyes and try to find out the color of that wall on the sole strength of your reason, this will then be impossible. Similarly, the knowledge of things that comes through reason cannot be discovered by the senses alone. For instance, you cannot find out who made that wall by simply seeing it with your eyes or touching it with your hands. Not at all, you rather need a reason to arrive at that conclusion.

In short, reason gives no guidance as far as the five senses work efficiently, and when the five senses become helpless, reason starts functioning. But, even the guidance given for this reason is not unlimited. This too stops at a certain limit. Then there are things the knowledge of which can neither be acquired through senses nor through reason.

For instance, to find out about this very wall, as to what manner of its use will please Allah Almighty and what manner of its use will displease Him, is possible neither through senses nor through reason. In order to give man the answer to such questions, the source that Allah Almighty has prescribed is what is known as Wahy. And the method it follows is that Allah Almighty selects one of His servants ordains him as His messenger and to him, He reveals His Word. This Word is Wahy.

This makes it clear that Wahy is the highest source of knowledge for man which offers to him the answer to questions about his life that cannot be solved by means of reason and senses, but, he still

has to have that knowledge. This further explains that reason and perception alone are not enough to show man the way. It is rather all the more necessary, almost inevitable, that the Divine Wahy be there for his guidance. Since Wahy is basically needed where reason does not work, it is, therefore, not necessary that everything communicated through Wah,y be compulsively comprehended through reason.

On the contrary, as reason is no help in finding out the color of some object since that is the job of the senses, so is the knowledge of many religious beliefs, the gracious giving of which is the sole prerogative of Wahy and not of reason. Furthermore, trusting reason alone for their comprehension is not sound and correct.

To begin with, it is totally senseless to discuss the issue of Wahy with a person who, God forbid, does no,t accept the very existence of God. But, for a person who believes in the existence of Allah Almighty and has faith in His perfect power, it is not at all difficult to understand that Wahy is a rational need, that it is possible, and that it is there for real.

If you have faith in the fact that this universe has been created by an absolutely powerful entity, He is the One who has sent a man down here to accomplish some particular mission, how then is it possible to imagine that He, after once having created man., would leave him off in total darkness, without ever telling him why did he come into this world, what his duties were, where was he destined to go and how could he realize the purpose of his life?

How could a person, whose sanity is still there, send one of his servants on a certain trip under a designated mission without ever telling him the purpose of the trip while he is leaving, nor explaining it to him later on through some message as to why he has been sent out there and what duties he is supposed to carry out during the trip?

When a man of ordinary reason cannot do something like this, how can something like this be imagined with respect to the most Holy Lord of the Universe under Whose ultimate wisdom this whole system of the universe is functioning?

After all, how is it possible that the Being, that did create such a mind-boggling system composed of the moon, the sun, the sky, the earth, the stars, and the planets, would remain unable to institute some arrangement of communication with His servants, through which human beings could be given guidance about the purpose of their lives? If there is ‘Iman or faith in the ultimate wisdom of Allah

Almighty, then admitting that He did not forsake His servants in the dark, will become all the more necessary; rather, on the contrary, He has surely instituted some regular system for their guidance. And so, this very regular system of guidance is known as Wahy (Revelation) and Risalah (Prophethood).

This makes it crystal clear that Wahy is not only a religious belief but also a rational need the rejection of which amounts to a rejection of the ultimate wisdom of Allah Almighty.

The Modes of Descent

This sacred sequence of Wahy (revelation) and Risalah (prophethood) came to an end with the last of the prophets, Muhammad al-Mustafa. Nevermore, shall Wahy descend upon any man, nor there is need for it.

Wahy used to come to the Holy Prophet in several forms and modes. In a hadith from Sah1h al-Bukhad, Sayyidah ‘A’ishah says that Sayyidna Harith ibn Hisham JJI ) once asked the Holy Prophet how did Wahy come to him.

The Holy Prophet said ‘there are times when I hear something like the chiming of bells and this mode of Wahy is the hardest on me. After that, when this – chime-sequence ends, that which has been said by the sound seems to have been committed to my memory. And there are times when the angel appears before me in the shape of a man.’ (Sahih al-Bukhari, 2/lJ

As regards the likening of the sound of Wah,y to the sound of bells in the hadith cited above, Shaykh Muhyy al-D1n ibn al-‘Arabi has explained it by saying that, in the first place, the sound of Wahy is continuous like the sound of a bell which does not break off in between; and in the second place, when the bell rings continuously, it generally becomes difficult for the listener to determine the direction of its sound because its sound seems to be coming from all directions.

And the Divine Word carries with it the distinction that it has no one single direction, in fact, the sound gives the impression of being heard from all directions. A correct realization of this phenomenon is just not possible without auditory experience, however, in order to bring this happening closer to common comprehension, the Holy Prophet has simply likened it to the sound of bells. (Fayd al-Bari,