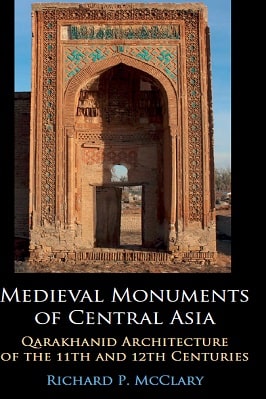 Qarakhanid Architecture of the 11th and 12th Centuries by Richard P. McClary

The author says: It was during the final stages of my doctoral research at the University of Edinburgh, examining the development of Rum Seljuq architecture,1 that I came across an image of the original section of brick strapwork decoration on the façade of the tomb of Nasr ibn ‘Ali in Uzgend.

I subsequently received funding from the university to travel to Kyrgyzstan in order to study the surviving Qarakhanid monuments in Uzgend, Safid Buland and Balasaghun.

From this trip grew a project to reassess the surviving corpus of buildings and examine the increasing volume of archaeological material from the region.

The award of a three-year post-doctoral research fellowship from the Leverhulme Trust allowed me to conduct this project in full.

The aims of this book are to present the individual monuments in close detail, and to integrate the study of Qarakhanid architecture into the architectural and cultural context of the wider region of Central Asia and eastern Iran in the period from the late tenth to the early thirteenth centuries.

This interdisciplinary volume uses a range of methodologies, but in essence the overall approach taken is to return to first principles, and the primary aim is to provide as detailed a study as possible of all of the surviving monuments in the corpus.

Whilst all the buildings covered have been published somewhere over the last century and a half, for the most part they are quite poorly documented and the material is widely dispersed throughout the huge body of scholarship produced during the Soviet period.

Much of the work is admirable, if hard to find, but in many cases it is hidebound by the nationalist methodologies enforced by the authorities from the 1920s onwards.

This nationalist paradigm has only intensified since the establishment of the post-Soviet republics in the region.

One aspect of this study is to move away from the anachronistic nationalist approach to monuments that were built under the aegis of a decentralised dynasty whose territory now falls within the boundaries of Kazakhstan, Kyrgyzstan, Uzbekistan, Tajikistan, Afghanistan and China.2

While the term Qarakhanid is far from perfect in the context of the study of architecture, referring as it does to a disparate and still relatively poorly understood dynasty whose members were often vassals of other regional powers, it encompasses a broadly definable region within which there is a distinctive corpus of monuments.3

This diverse group of buildings share a number of decorative motifs which were not generally used, especially together, on other regional or dynastic categories of buildings.

While it is clearly a dynastic term, in the context of architecture it can be employed to define the regional style which developed in the lands over which the various members of the family ruled in the eleventh and twelfth centuries.

Naturally, the style did not end with the last Qarakhanid ruler in 1212, indeed, it can be seen to have had a major impact on the architectural style which emerged under the Timurids in the late fourteenth century.

However, it clearly emerged as a result of Qarakhanid patronage, although almost certainly drawing, in part at least, on earlier Samanid practices.

To show the imprecise nature of the term, one only need cite the example of the minaret in Vabkent which was erected at the behest of the Burhanid sadr between 1196/7 and 1197/8, who was at that time under nominal Qara Khitai rule,4 but is entirely Qarakhanid in style.

I have aimed to combine a forensic examination of the details of the buildings with a broad regional overview of monumental architectural developments in the period of study in order to understand which elements are unique, and which form part of the wider eastern Islamic style of brick building.

The success or otherwise of this use of micro analysis as evidence for macro observations remains for you the reader to judge.

This Introduction concludes with a brief historical overview of the Qarakhanid dynasty, and is followed by a summary of the little that is known about the preceding Samanid architecture in Chapter One.

Chapter Two examines the earliest major dated surviving monument of the Qarakhanids, the tomb of Shah Fazl in Safid Buland, located at the far northeastern end of the Farghana valley.

Chapter Three examines the development of the style over time through the study of three connected tombs in Uzgend, with dates of construction spanning from the early eleventh century to the late twelfth century.

This is followed in Chapter Four by a detailed analysis of three of the main Qarakhanid-era structures in Bukhara and its immediate environs, while Chapter Five comprises a study of the surviving minarets in the region.

Chapter Six is focused on establishing the distinctive characteristics of Qarakhanid architecture through a combination of specific case studies and more general observations of particular styles and motifs found across the corpus.

The chapter also addresses the long-term contribution that the architectural developments which emerged during the period of study had on later building tradi- tions in the region, especially that of the Timurids.

Having examined most of the main monuments, Chapter Seven consists of a detailed study of the epigraphy found across the corpus, and how it relates to the styles employed on contemporary coinage of the Qarakhanids.

The final chapter examines the broader process of urban expansion which took place under Qarakhanid rule, including an overview of some of the increasingly large volume of archaeological evidence from across the region.

Despite the very limited number of surviving monuments, the Qarakhanids were major patrons of architecture across a large portion of Central Asia over the course of two centuries, especially in the major cities of Bukhara and Samarkand.

There is a multitude of reasons for the limited survival of monuments built under their patronage. Numerous large earthquakes over the course of the last millennium have taken their toll.

The major building programme under the Timurids is known to have resulted in the loss of a Qarakhanid madrasa in Samarkand, but it can be assumed that many other unrecorded buildings were also destroyed during the same period.

Palaces rarely outlasted their patron, but buildings such as mosques and tombs tend to survive as they remained in use over long periods of time.

There was limited investment in the preservation of Islamic monuments during the period of imperial Russian rule of Turkistan from the mid-nineteenth century onwards, and what little there was often involved a shift from religious to scientific significance.5

Many monuments survived into the early twentieth century, but the vast scale of the systematic destruction of Islamic monuments that took place in the first two decades of Soviet rule in the region has a large part to play in the limited size of the surviving corpus.

In Bukhara alone, there were 360 mosques in 1917, but by 1940 just thirty-five buildings were deemed worthy of preservation, of which only four were mosques, along with two tombs.6

Alongside this process of destruction, the restoration and repair of a number of the monuments which were deemed to be of historical significance took place, at which point they were stripped of any religious context or use, due in part to the association between Islam and feudalism made by the Soviet state.7

Although there was an inherent paradox in the desire to preserve monuments which were associated with religion, the preservation of Islamic architecture was a stated goal of the government in the early years of Soviet rule in Central Asia, from 1917 to 1924.

However, the rhetoric of preservation clashed with the reality of a shortage of per- sonnel and a lack of funding.8

Later, under Stalin, involvement in the process of restoration could be fraught with danger, with accusations of being a reactionary made against individuals promoting the resto- ration of historic monuments.

In 1930, the Uzcomstaris was created to protect, study and restore historic buildings in Uzbekistan, but by 1943 it had been dissolved and Umnikov, the former head of its predecessor Turkcomstaris,9 had been arrested and exiled.10

The national delimitation of the Central Asian republics began in 1924, and after 1932 separate republican preservation committees

THE FATIMID ARCHITECTURE IN CAIRO pdf

THE ART AND ARCHITECTURE OF ISLAMIC CAIRO pdf download

The Imagined and Real Jerusalem in Art and Architecture pdf