Home » Modernism and the art of Muslim South Asia

Modernism and the art of Muslim South Asia 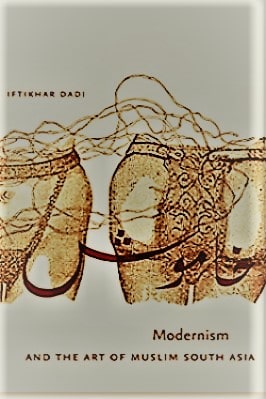 MODERNISM AND THE ART OF MUSLIM SOUTH ASIA – Book Sample

About the Book – MODERNISM AND THE ART OF MUSLIM SOUTH ASIA

This pioneering work traces the emergence of the modern and contemporary art of Muslim South Asia in relation to transnational modernism and in light of the region’s intellectual, cultural, and political developments.

Art historian Iftikhar Dadi here explores the art and writings of major artists, men and women, ranging from the late colonial period to the era of independence and beyond.

He looks at the stunningly diverse artistic production of key artists associated with Pakistan, including Abdur Rahman Chughtai, Zainul Abedin, Shakir Ali, Zubeida Agha, Sadequain, Rasheed Araeen, and Naiza Khan. Dadi shows how, beginning in the 1920s, these artists addressed the challenges of modernity by translating historical and contemporary intellectual conceptions into their work, reworking traditional approaches to the classical Islamic arts, and engaging the modernist approach towards subjective individuality in artistic expression. In the process, they dramatically reconfigured the visual arts of the region.

By the 1930s, these artists had embarked on a sustained engagement with international modernism in a context of dizzying social and political change that included decolonization, the rise of mass media, and developments following the national independence of India and Pakistan in 1947.

Bringing new insights to such concepts as nationalism, modernism, cosmopolitanism, and tradition, Dadi underscores the powerful impact of transnationalism during this period and highlights the artists’ growing embrace of modernist and contemporary artistic practice in order to address the challenges of the present era.

Introduction – MODERNISM AND THE ART OF MUSLIM SOUTH ASIA

This book traces the emergence of modernism by artists associated with “Pakistan” since the early twentieth century, but it is not a broad history of a national art, nor does it seek to offer a complete account of the selected artists considered here.

It traces one in fluential genealogical trajectory—the emergence of artistic subjectivity in relation to a constellation of conceptual frameworks, nationalism, modernism, cosmopolitanism, and “tradition.” Although artists contributed to national life by forming new institutional frameworks for the patronage, exhibition, and reception of modern art—a labor that is an inextricable aspect of their per-sonae—the addressee of their art cannot be simply equated with a Pakistani nationhood marked by aporias and impasses as a consequence of complex historical developments.

Pakistani nationalism has provided painting with no “ancient mythopoetic or iconographic anchorsheet,” a critic noted as early as 1965.1 Rather, artists drew selectively from broader Persianate and Islamicate cultural and religious legacies,2 yet also situated themselves as modern cosmopolitans addressing the quandaries of the self in modernity.

In this book, therefore, the nation-state functions as only one frame of meaning in desig-nating the artists’ complex practices: in a larger sense, this project can also be viewed as a deconstructive study of nationalism that attempts to fashion a new narrative of a transnational South Asian Muslim modernism from within a national art history.

Postcolonial scholarship has demonstrated that translating concepts ini-tially developed for the study of metropolitan cultures for the study of the postcolonial context is a persistent and unavoidable issue.3 While acknowl-edging the limitations of using broad descriptive markers, this book offers fresh interpretations of the terms “nationalism,” “cosmopolitanism,” “mod-ernism,” and “tradition” by inflecting, stretching, estranging, and translating their metropolitan meanings to characterize the art and writings of the artists and their critics.4 Informed by postcolonial theory and globalization studies, this account views modernism as inherently transnational, rather than as national or even international. Indeed, Andreas Huyssen has advanced the term “modernism at large,” by which he refers to “crossnational cultural forms that emerge from the negotiation of the modern with the indigenous, the colonial, and the postcolonial in the ‘non-Western’ world.”5

The term “tradition” is especially vexed and liable to be seen simply as opposed to the modern. This study argues against such a reduction and dem-onstrates how artists strategically reworked fragments of classical Islamic tradition into modern formulations characterized here by the term “mod-ern Islamic art.” The category of “Islamic art” usually denotes artistic prac-tices over a specific geographic area before the advent of modernity, but this definition is not found in Islamicate intellectual and discursive formulations.

Primarily an allochronistic orientalist construction forged during the age of colonialism, Islamic art as a discipline was viewed through European hierarchies of fine/applied art and by denial of any relationship to modernity. “Islamic art” marks a catachresis. It is precisely this antifoundationalism of the discipline of Islamic art, along with the discursivity of other Islamicate disciplines, that provided artists with a “tradition” that they investigated in their practice with an increasingly incisive understanding rather than re-maining limited to reworking subject matter and style. It may be noted that academic work on modern Islamic art is lacking; indeed, many scholars of classical Islamic art view the term itself with suspicion.6

This study, however, argues that a decolonization of “Islamic art” was taken up as a critical mod-ernizing practice by the artists examined here, who drew upon “tradition” by remembering lived practice, by turning toward its discursive articulations in poetry, literary criticism, ethics, and art. Modern artistic practice unceas-ingly seeks adequate discursive and aesthetic ground but never quite secures it; this crisis-ridden quest characterizes an important facet of its modernism and contributes to its ongoing development.

This book undertakes extended readings of the work of key artists between the early decades of the twentieth century and the present—Abdur Rahman Chughtai paintings in relation to Mughal aesthetics and late colonialism from the 1920s onward, works of mid-century artists Zainul Abedin, Shakir Ali, and Zubeida Agha with reference to transnational modernism and national independence, Sadequain’s oeuvre in the context of Islamic calligraphy dur-ing the 1960s and 1970s, and the works of Rasheed Araeen and Naiza Khan with reference to issues of race and gender since the late 1970s.7

The epilogue examines how emergent contemporary practice continues to grapple with the quandaries of tradition and subjectivity. All the artists studied here have sought to situate their practice in the broader intellectual and social contexts of their eras and have also devoted considerable effort to building new insti-tutional frameworks of exhibition, patronage, and reception for modern art.

The relation between modern artistic practices and the intellectual history of Muslim South Asia is of particular significance for this study, undertaken through an analysis of the art and writings of twentieth-century artists and their critics. One of its larger goals is to exemplify the richness of intellec-tual and discursive legacies of important regions of non-Western modern artistic practice, rather than seeing all such artists as “hybrid” and migrant figures drawing only on lived traditions or in mimicry of Western art. The conceptions of “hybridity,” “mimicry,” and “in-betweenness” have prompted important scholarly work over the last two decades, but the generality and imprecision of these conceptions has become a methodological straitjacket in purportedly accounting for the work of all modern non-Western artists.8 A particularly common understanding of “hybridity” fails to distinguish be-tween lived traditions and discursively articulated ones.

“Mimicry” suggests that the primary motivation for artistic practice was with reference (and sly opposition) to the West, which I hope to show is not primarily the case for artists studied here. And although the “in-between” space is seen as beyond enunciation and articulation (and although recognizing that all good art en-acts singular dimensions of meaning that cannot be fully articulated), this book, by contrast, does argue for analytical and conceptual comprehension of many of the artists’ concerns, provided one accounts for their intellectual trajectories.

The discipline of art history has until recently largely omitted consider-ation of modern art outside Western canonical developments. There are few existing academic studies on artistic modernism in South Asia, for example,9 but recently, there has emerged a growing interest in the scholarly study of non-Western modern art.10 In discussing artistic modernism in Muslim South Asia, this book hopes to contribute to the emerging body of scholarship by employing recent comparative and interdisciplinary approaches.11 It provides for a departure from previous histories of South Asian modern art, many of which are inscribed within the horizon of the national and do not acknowl-edge the full force of transnationalism until after the advent of globalization