Muslim Exegesis of the Bible in Medieval Cairo pdf download 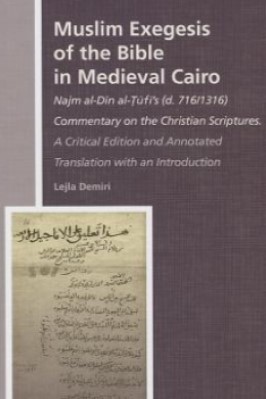 Muslim Exegesis of the Bible in Medieval Cairo: Najm al-Dīn al-Ṭūfī’s (d. 716/1316) Commentary on the Christian Scriptures. A Critical Edition and Annotated Translation with an Introduction

MUSLIM EXEGESIS OF THE BIBLE IN MEDIEVAL CAIRO – Book Sample

CONTENTS – MUSLIM EXEGESIS OF THE BIBLE IN MEDIEVAL CAIRO

[Critical Commentary on the Gospel of Luke]

{206}     Now it is time to begin the Critical Commentary on the Gospel of Luke.

{207}     Among other things, there is (Luke’s) statement in the prologue (of his Gospel) with regard to the description of John, son of Zechariah, when Gabriel brought (Zechariah) the glad tidings of his birth: ‘He shall be great before the Lord, drink neither wine nor intoxicating drink, and he shall be filled with the Holy Spirit,’1 and in the end of the prologue: ‘And his father Zechariah was filled with the Holy Spirit.’2

{208}    I say: This statement contains a disgrace and a refutation of the Christians. As for the disgrace, the angel of the Lord describes the son of Zechariah as someone who would not drink wine, in a manner of praising him, while the Gospels include the statement that Christ filled his cup and said: ‘This is my blood, and I shall not drink the juice of the vine again until I reach the Kingdom of Heaven’3 or something to this effect, which has already been mentioned4 and in which he explicitly declared that he drank wine.

This indicates that John, son of Zechariah, was more virtuous than Christ, because the religion of Christ consists of renouncing the world and its desires. Consequently, John would have abstained from it in instances where Christ did not abstain from it. Yet they do not claim this, nor do we. Hence we have indeed compelled them to accept our argument (ilzām).

{209}     As for the refutation, the Gospel includes the statement that the son of Zechariah became filled with the Holy Spirit in the womb of his mother, which is more impressive than the case of Christ, since the Gospels relate that the Holy Spirit only came to Christ when he was baptised by John the Baptist.5

Likewise, the Gospel includes (the account of) Zechariah’s becoming filled with the Holy Spirit. Thus, the Christians are compelled to accept that Zechariah and his son should be two gods or two sons of God, due to their sharing the Holy Spirit with Christ, without any difference between the two and Christ therein, except that Christ was born without a human (father) and that at his hands there appeared whatever signs did appear.

However, the latter is not a defining difference with respect to fatherhood and sonship, but rather, it is with respect to the appearance of miracles whereby God, the Exalted, confers distinction upon whoever He wishes among His creation. And even more impressive than this is what is mentioned in chapter three, that the Holy Spirit used to descend upon Simeon.6 Consequently, it necessitates that he too should be the Son of God.

{210}     Among other things, there is (Luke’s) narration that when the angel of the Lord came to Mary, she was afraid of him, and [the angel] said: ‘Do not be afraid, O Mary! You have indeed won favour with God. You shall conceive and give birth to a son, and he shall be called Jesus. He shall be great, and the

“Son of the Highest” he shall be called. The Lord shall give him the throne of 235b David, his father. And he shall reign over the house of Jacob forever, and of his kingdom there shall be no termination’.7

{211}      I say: As for his statement, ‘and the “Son of the Highest” he shall be called,’ it can be interpreted in two ways. The first consists of what has previously been indicated, which is that what is meant by ‘son’ is ‘servant’.

The second is that it is a condemnation of whoever believes that ‘sonship’ with respect to him has not the meaning of ‘servanthood’. For the assumption (implicit in this statement) is that (the angel of the Lord) glorifies (Jesus’) rank, fame and the loftiness of his station, thereby misguiding some of mankind until they eventually call him the ‘Son of God’.

Moreover, this statement in this chapter is incompatible with what is found in the Gospel about the Jews crucifying and despising Christ. So, where is his ‘reign over the children of Jacob forever’, if thereby the literal sense of the statement is meant, which would make it an obvious offense against what is perceived by the senses?8

For Christ is now in the presence of God, Glorified is He, while the children of Jacob, among them the Jews and the Christians, are at war, although it is imperative for a sovereign that his realm be peaceful and his subjects united.

But if it means that his name in [the ranks of] prophethood will last forever, then all the prophets share this with him. Likewise, if it is meant thereby that he has a religion and a revealed law which, in accordance with the claims of their followers, will last forever, (then this too is shared with other prophets).

{212}     His statement, ‘the Lord shall give him the throne of David, his father,’ is in contradiction with what has been mentioned before, (about the Gospel report) that Christ denied David’s fatherhood, adducing (David’s) words, ‘the Lord said to my lord,’ as an argument for his denial.9

Moreover, if by ‘the throne of David’ his reign is meant, then Christ never reigned, but rather he was only a poor and an itinerant ascetic calling to the path of truth. Yet the Jews—the priests, scribes and the Pharisees—were opposing him while he fled from them from one place to another, until they crucified him at the very end, and by killing him they drew near to God, according to your claim. However, if by ‘the throne of David’ his place of habitation and the abode of his reign are meant, then that is Jerusalem, but the Christians are separated from it.

But if by his throne is meant the lands of the Byzantines and Franks and the abode of the Christian realm such as Constantinople and the like, then that is not a throne of David, nor do these people follow Christ’s religion, so that this report could accurately be applied to them. Therefore, this is a falsely ascribed statement without any basis.

Furthermore, the establishment of Christian reign among the Byzantines is not because of Christ, but rather it is due to Isaac’s report and prayer that this would happen to his son Esau,10 who is the father of the Byzantines, as mentioned in the Torah.11

{213}     Among other things, there is (Luke’s account) in chapter two, quoting from the angel of the Lord that he said to the shepherds: ‘Rejoice at these glad tidings, for a child has been born to you today, a Saviour, the one who is Christ the Lord.’12…..