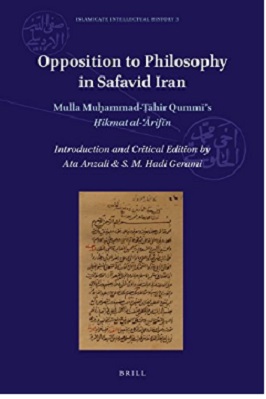 The seventeenth century has been characterized by scholars of Ottoman and Savafid history alike as a period when religious fanaticism rose and eventually triumphed over the rational sciences and/or Sufism. It has been suggested, for example, that the study of rational sciences in Ottoman madrasas diminished significantly in the face of a puritanical movement spearheaded by a preacher named Meḥmed Ḳāzīzāde (d. 1044/1635) and propagated by his followers in the first half of the century.1

Similarly, it is said that in the second half of the century, a successful campaign was waged against Sufism and philosophy in the Safavid realm by scholar/preachers like Muḥammad-Ṭāhir Qummī (d. 1100/1689), Muḥammad-Bāqir Majlisī (d. 1110/1699), and Mīr Muḥammad Lawḥī (d. after 1081/1671). Their campaign, which was supported by the last Safavid king, Shāh Sulṭān Ḥusayn (r. 1105/1694-1135/1722), resulted in the near total eradication of Sufism2 and a precipitous and significant decline in the study of Islamic philosophy.

As the intellectual history of the early modern era receives more attention, however, it has become increasingly clear that the picture is more complicated than these narratives suggest. In a recent monograph devoted to scholarly currents in the Ottoman Empire and the Maghreb in the seventeenth cen-tury, Khaled El-Rouayheb challenges the existing scholarly paradigm, arguing that the evidence for the purported decline in the study of rational sciences in the seventeenth century Ottoman madrasa system does not withstand critical scrutiny.3

The proponents of Ḳāzīzādelī movement, he says, were a minority group within the Ottoman religious establishment, and their role in the decline of practices of which they did not approve should not be exag-gerated. Moreover, El-Rouayheb provides detailed evidence that the position of important Ḳāzīzādelī figures, including Meḥmed Birgevī (d. 981/1573), who has been considered the intellectual forefather of the movement, was more nuanced than previously allowed and did not entail wholesale abandonment of the rational sciences.4

Based on the existing bio-bibliographic evidence, El-Rouayheb concludes that, “the study of philosophy and the rational sci ences continued unabated in Ottoman scholarly circles throughout the seven-teenth century.”5

Similarly, recent studies have revealed that while the organized networks of major Sufi orders were indeed significantly weakened by the end of Safavid rule, the extent to which this was caused by active persecution of Sufis has been exaggerated.6 I have argued somewhere else, for example, that the decline of organized Sufi networks is better attributed to an epistemic shift that took place in the hearts and minds of the Safavid populous as it went through the protracted socio-political process of conversion to Twelver Shiʿism.

This process did not result in a wholesale rejection of Sufism as an undesirable ves-tige of Iran’s Sunni past. Instead, important aspects of the social functions and intellectual components of Sufism were adopted by Twelver religious scholars.7

Popular scholars like Shaykh Bahāʾī (d. 1030/1621) and the Majlisīs, both father and son, were often treated by the public much as Sufi pīrs were treated by their followers.8 Other mystically-minded religious scholars, includ-ing Mulla Ṣadrā (1045/1635) and Fayż Kāshānī (1090/1680), incorporated fundamental elements of the Sufi worldview into Savafid Shiʿi thought.

This synthesis was so successful that even the most controversial of Sufi doctrines, the unity of existence (waḥdat al-wujūd), was discussed and debated in Qajar madrasas through the teaching of, and commentary on, Mullā Ṣadrā and Ibn ʿArabī. Therefore, although it is fair to say that the traditional social structure of Sufism was marginalized over the course of the seventeenth century, this period was one of success for the Sufi worldview, which had significant impact on—and was incorporated into— Safavid Shiʿi piety.

The decline narrative has also been popular when it comes to Islamic phi-losophy in the Safavid period. The standard conception is that the study and practice of philosophy experienced a renaissance in the early part of the sev-enteenth century with the emergence of the so-called School of Isfahan, which was led by towering figures like Mīr Dāmād (d. 1040/1631-2), Mīr Findiriskī (d. 1050/1640), and Mulla Ṣadrā.9

This renaissance did not last long, however, and the study of philosophy plummeted in the face of mounting criticism from puritanical and fanatic mullas, led by hard-liners like Majlisī Jr. and Qummī, who had unrivaled access to and influence in the Safavid court during the last half century of the dynasty’s rule.

In the coming pages I will argue that the bio-bibliographical and other primary sources do not support the latter part of this narrative and that the study of philosophy and other rational sciences continued to flourish in the final decades of Safavid rule, experiencing only a slight decline despite growing opposition.

When Qummī took it upon himself to write Ḥikmat al-ʿārifīn sometime dur-ing Shah ʿAbbās II’s reign (r. 1052/1642-1077/1666), the anti-Sufi campaign of the second half of the seventeenth century was gaining momentum. Popular preachers like Mīr Lawḥī had already begun to denounce Sufis from the pul-pit as “Sunni heretics,” and Qummī had involved himself in a heated debate about the vices of Sufism with Majlisī Sr. (d. 1070/1659), one of the most promi-nent religious scholars of the time. Sufis still had the upper hand, however, thanks to their rooted social networks, public support, and the sympathy of the Safavid king.

As a result, both Qummī and Mīr Lawḥī had to be cautious in their criticism, at times publishing under pseudonyms or keeping silent for fear of their lives.10 Ḥikmat al-ʿārifīn was the first full monograph of the Safavid era dedicated to a critique of philosophy, but Qummī had long had his eye on this “heretical” discipline. This is evidenced by his earlier work, namely a short treatise titled Bahjat al-dārayn, which he completed in 1055/1645, just a few years after he moved to Qom.11

Based on the chronology of his works, it appears that he started to publicize his views against philosophy much later than his critiques of Sufism. Only during the reign of Shah Sulaymān (r. 1666/1077-1105/1694), who appointed Qummī as the judge and Friday prayer leader of Qom, did Qummī feel secure enough to openly write anti-philosophy works in Persian to reach a broader audience.

His efforts in writing works like al-Favāʾid al-dīniyyah and the concluding section of Tuḥfat al-akhyār were successful in that they led to an increase in volume and number of anti-philosophy voices in the final decades of Safavid rule. A superficial understanding of this dynamic, however, has led some contemporary scholars to espouse an uninformed and romantic view regarding the persecution of philosophers during the Safavid period—one that casts philosophers as noble guardians of rationalism and reason who, alongside peace-loving and tolerant Sufis, were threatened by big-oted literalists and exotericists.

A detailed and passionate articulation this perspective is found in a chapter by Hamid Dabashi on philosophy in Safavid Iran in Seyyed Hossein Nasr’s edited volume, A History of Islamic Philosophy.12

In a tone that betrays his disdain for the opposing camp, Dabashi writes: “Those who engaged in philosophical matters did so at some peril to their personal safety and social standing,” and thus, “the fate of philosophy was left in the hands of whimsical monarchs who for a number of practical and symbolic self-interests, such as their need for a court physician and court astronomer, would inadvertently provide for the possibilities of philosophical pursuit” which “has never had any institutional foundations except at the clandestine peripheries of the madrasa system, in the libraries of wealthy individuals, and ultimately in the whimsical vicissitudes of the court.”13 Dabashi dramatizes the situation by suggesting that the pursuit of philosophy had “always” been a “precarious act,” not only during the Safavid period, but “during the course of Islamic intellec-tual history.” He immediately re-focuses on the Safavid period, however, stating that “financial support for students of philosophy was virtually non-existent,” and that “the madrasa system and its total reliance on religious endowments prohibited any financial support for students who were attracted primarily to philosophy.”14

Dabashi offers scant historical evidence to support such sweeping claims of philosophers falling victim to bigotry and narrow-mindedness. He cites the example of Mulla Ṣadrā’s retreat from Shiraz to Kahak, a village near Qom, and he mentions Shāh Sulṭān Ḥusayn’s expulsion of another philosopher, Mulla Ṣādiq Ardistānī (d. 1134/1721), in the final decade of Safavid rule.15

In addition, Dabashi references reports that “on the front doors of some schools in Isfahan the patrons had specifically prohibited the teaching of philosophy.”16 But if the late Safavid environment was so hostile to the pursuit of philosophy, how did it nurture one of the most innovative periods of philosophical thinking in