Home » Purification Heart – Signs, Symptoms and Cures of the Spiritual Diseases of the Heart pdf download

Purification Heart – Signs, Symptoms and Cures of the Spiritual Diseases of the Heart pdf download 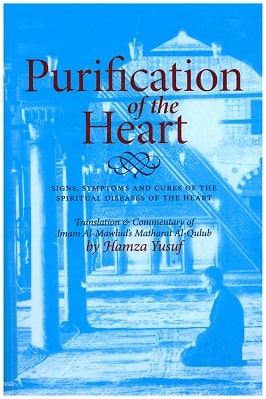 Purification Heart – Signs, Symptoms and Cures of the Spiritual Diseases of the Heart     Translation and Commentary of Imām Mawlūd’s Maṭharat al-Qulūb by Hamza Yusuf

PURIFICATION HEART – SIGNS, SYMPTOMS AND CURES OF THE SPIRITUAL DISEASES OF THE HEART

Have courtesy with God, the High and the Majestic, by practicing modesty and humility—

dejected out of shame and humility humbled in awe, imploring Him—by giving up your designs for His, emptied of covetousness for what His servants have,

by hastening to fulfill His commands, and by being wary of the subtle encroachment of bad manners.

If you—the spiritual aspirant—realize your attributes of servitude, you will then be assisted with something of the attributes of the Eternally Besought.

Realize your abject character and impoverishment, and you will gain dignity and wealth from the All-Powerful.

There is no salvation like the heart’s salvation, given that all the limbs respond to its desires.

Courtesy: The Heart of Purification

Imam Mawlüd begins with a play on words that is lost in translation. The word for beginning in Arabic is bad’u, and the word for heart (qalb) also means to reverse something. If one were to literally reverse the word bad’u in Arabic, the word adab would result, which is the term for courtesy—where this treatise begins, since courtesy is the portal to the purification of the heart.

Adab in Arabic means a combination of things, in addition to courtesy. Adib (a derivative of adab), for example, has come to mean an erudite person, someone who is learned, for high manners and courtesy are associated with learning and erudition. But at the root of the word adab, the idea of courtesy is firmly established.

Imam Mawlud starts his treatise with courtesy, since excellent behavior and comportment are the doorkeepers to the science of spiritual purification. One must have courtesy with regard to God—behave properly with respect to His presence—if he or she wishes to purify the heart.

But how does one achieve this courtesy? Imam Mawlud mentions two requisite qualities associated with courtesy: modesty (ḥayā’) and humility (dhul).

Hayā’, in Arabic, conveys the meaning of shame, though the root word of ḥayā’ is closely associated with life and living.

Most adults alive today have heard it said when they were children, “Shame on you!” Unfortunately, shame has come to be viewed as a negative word, as if it were a pejorative. Parents are now advised never to “shame a

child,” never correct a child’s behavior by causing an emotional response. Instead, the current wisdom suggests that people always make the child feel good regardless of his or her behavior. Eventually, what this does is disable naturally occurring deterrents to misbehavior.

Some anthropologists divide cultures into shame and guilt cultures. They say that guilt is an inward mechanism and shame an outward one.

With regard to this discussion, guilt alludes to a human mechanism that produces strong feelings of remorse when someone has done something wrong, to the point that he or she needs to rectify the matter.

Most primitive cultures are not guilt-based, but shame-based, which is rooted in the fear of bringing shame upon oneself and the larger family.

What Islam does is honor the concept of shame and take it to another level altogether—to a rank in which one feels a sense of shame before God.

When a person acknowledges and realizes that God is fully aware of all that one does, says, or thinks, shame is elevated to a higher plane, to the unseen world from which there is no cover. In fact, one feels a sense of shame even before the angels.

So while Muslims comprise a shame-based culture, this notion transcends shame before one’s family—whether one’s elders or parents— and admits a mechanism that is not subject to the changing norms of human cultures. It is associated with the knowledge and active awareness that God is all-seeing of what one does—a reality that is permanent. The nurturing of this realization deters one from engaging in acts that are displeasing and vulgar. This is the essence of the noble prophetic teachings.

Imam Mawlud mentions that one should also have dhul, which literally refers to being lowly, abject, or humbled.

The Quran mentions that people who incur the anger of God have this state of humiliation thrust upon them. But what is meant here is something different; it is humility or humbleness voluntarily assumed before God, which is required for courtesy.

Interestingly, the word munkasiran is translated as dejected, though literally it means broken.

It conveys a sense of being humbled in the majestic presence of God. It refers to the awesome realization that each of us, at every moment, lives and acts before the august presence of the Creator of the heavens and the earth, the one God besides whom there is no power or might in all the universe.

When one seriously reflects on God’s perfect watch over His creation, the countless blessings He sends down, and then considers the kind of deeds one brings before Him—what possible feelings can one generate except humility and degrees of shame?

With these strong feelings, one implores God to change one’s state, make one’s desires consonant with His pleasure—giving up one’s designs for God’s designs. This is pure courtesy with respect to God, a requisite for spiritual purification.

The Prophet       said, “None of you [fully] believes until his desires are in accordance with what I have brought,” aligned and at peace with the teachings of the Prophet      , which embody the legacy of the prophetic teachings of Noah, Abraham, Moses, and Jesus.

This entails striving to free oneself of greed and refusing the ethic of doing something for an ulterior motive that is essentially selfish and dissonant with the teachings of God’s prophets. One seeks nothing from God’s servants, that is, human beings.

If one seeks something, he or she should seek it from God, the Sovereign of the heavens and the earth. The basic rule is: ask God and then work, that is, take the means (asbab) that one must use to achieve something in this world.

encroachment of bad manners,” namely, faults that one is unaware of. A hadith states, “One of you will say a word and give it no consideration, though it will drag the person [who uttered it] through Hellfire for 70 years.”

A person can be so disconnected from prophetic teachings he or she may easily be careless about something that in reality invites great harm. It is comparable to a heedless person who finds himself in diplomatic circles laden with protocol,

though he makes horrendous breaches of protocol without realizing it. With regard to God, the matter is obviously much more serious, in which case one’s soul may be harmed by one’s own breaches. The protocol here involves knowledge of God and what He has enjoined and proscribed.

Imam Mawlud speaks next about freedom, which is achieved when one realizes the qualities of shame and humility, and empties oneself of their opposites (shamelessness and arrogance). With these qualities come true freedom,

wealth, and dignity, which require manumission from the bonds of one’s whims. People may claim to be “free,” yet they cannot control themselves from gluttony in the presence of food or from illicit sexual relations when the opportunity presents itself. Such a notion of freedom is devoid of content.

Freedom has real meaning, for example, when a situation of temptation arises and one remains God-fearing, steadfast, and in control of one’s actions. This holds true even when the temptation produces flickers of desire in a person who nonetheless refrains from indulging.

Imam al-Ghazali speaks at length about the stomach and the genitals as the two “dominant ones”; if they are under control, all other aspects of desire are kept in check. One may also include in this the tongue, which can be a formidable obstacle.

There are people, for example, who appear incapable of refraining from backbiting and speaking ill of others, and they often do so without realizing it.

It is common for people to dislike impoverishment or humility because they perceive in these qualities abjectness.

Yet the Prophet chose poverty over wealth: he did not have money in his home, and he slept on the floor upon a bed made out of leather stuffed with palm fibers; he did not have jewelry; he had two pillows in his room for guests. In much of today’s culture, living this way would be considered extreme poverty.

What Imam Mawlud stresses is the following: dignity with God comes to those who are humble before Him; who place prime value on how they are received by their Maker and not by how they will be judged by the ephemeral norms of

Proofs of this Divine law abound. There are many accounts, for example, of people who were once in positions of authority and wealth, who then find themselves paupers completely stripped of their former glory, reduced, in many instances, to wards of the state.

God is powerful over all things, and all good, authority, and provision are in His hand, not ours.

From this, we derive an important principle: if one ignobly pursues an attribute, he or she will be adorned by its opposite. If one is humble before God, He will render him or her honorable.

Conversely, God humbles and humiliates the haughty ones, those who arrogantly seek out rank and glory before the eyes of people. The Quran gives the examples of Pharaoh and Korah and their abject fall and disgrace.

Imam Mawlud says next that there is no salvation “like the heart’s salvation, given that all the limbs

respond to its desires,” If one’s heart is safe, so too are the limbs, for they carry out the deeds inspired by the heart, The limbs of the corrupt become instruments through which corruption is spread: Today, We shall set a seal upon their mouths; and their hands will speak to Us and their fret shall bear witness to what they have earned (QURAN, 36:65); And spend [on the needy] in the way of God. And do not throw yourselves into ruin by your own hands (QURAN, 2:195);

And We shall say, “Taste the chastisement of burning! That is for what your hands have forwarded [for yourselves]. And God never wrongs [His] servants” (QURAN, 3:181-82); They shall have immense torment on the day when their tongues and their hands and their legs bear witness against them for what they had been doing (QURAN, 24:23-24).