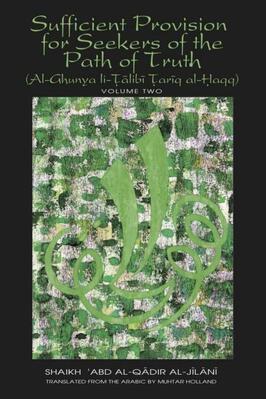 SUFFICIENT PROVISION FOR SEEKERS OF THE PATH OF TRUTH Vol 2

As defined by the Arabic lexicographers, the term tafsir signifies “expounding, explaining, or interpreting the narratives [qisas] that occur within the Qur’an, and making known the significa- tions of the strange words or expressions, and explaining the occasions on which the verses [ayat] were revealed.”

Sirat al-Lail [The Night]. This became Siira in the eventual compilation of the whole Qur’an, the revelation of which was still at an early stage, of course, at the time of the incident described here.

When conducting the early morning ritual prayer [salat al-fajr], which consists of two cycles [rak‘atan], the Imam recites Sirat al-Fatiha, followed by another short Siira, in each of the two cycles, and in a voice that is audible to the congregation. 6 Volume Two recitation:

“These are the exalted gharanig (meaning the idols [asnam]); their intercession can be hoped for.”

The idolatrous polytheists [mushrikiin] were delighted to hear this, because they were firmly convinced that those idols of theirs were endowed with the power of intercession.

They used to say: “These are our intercessors [shufa‘a’] in the presence of Allah.”