Taxation and Tax Policies in the Middle East pdf 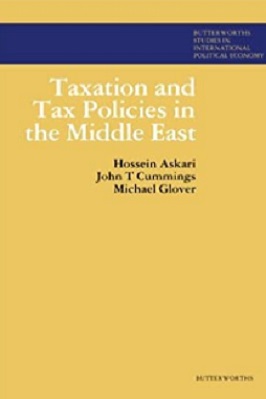 TAXATION AND TAX POLICIES IN THE MIDDLE EAST – Book Sample

Taxes, the adage assures us, are one of life’s two certainties. But from the economist’s point of view, taxes, and the policies that govern their collec­tion, must be considered with more sophistication than a mere recognition of their inevitability. The importance of taxation to any country, regardless of its level of economic development, İs multifaceted.

First, and most obviously, taxes are needed to finance current government spending as well as those capital expenditures that the public sector deems advisable İn order to promote economic development. Secondly, taxes can be effectively used to mobilize a society’s savings and to direct them toward promising investment prospects.

This latter function can be İmportant in any society, but İt is particularly so İn less developed countries (LDCs) where private capital markets are İmmature. it is also İmportant, İn the case of many developing countries, where the most critical İnvestment needs are far projects which necessitate long payback periods, or in which consider­able external factors are İnvolved, such as investments in social and economic infrastructure.

Thirdly, taxes can be an effective and fairly rapidly acting means far altering the distribution of İncome, especially when the existing pattern favors a rather small wealthy class, while much of the population is on the fringes of subsistence.

Though many highly developed societies which adopted the ideal of the social welfare state one or two generations ago are now questioning the effectiveness of current public sector efforts designed to improve income distribution, there is little doubt that previous policies in these countries benefited the lower and middle İncome classes.

Fourthly, carefully designed and monitored tax mechanisms can be used to encourage the private sector of the economy İn directions which are deemed to be beneficial, in the long run, to the society as a whole. For example, private investment in industrial or agricultural İmprovements can be encouraged ( or discouraged, İn areas such as real estate speculation) by the way in which tax regulations relating to profits are planned. in this way investments leading to greater production, which are often risky or have relatively long payback periods, can be encouraged at the expense of alternative İnvestment opportu­nities that offer high and quick returns but negligible social gains.

Fifthly, though İt may be fashionable today to denigrate the Keynesian fiscal equations, few economists would argue that tax policy has no role in Purpose and outline of study

promoting or retarding inflation. Political considerations and the complex­ity of western capitalist economies in the !ast 50 years may have blunted the effectiveness of Keynesian remedies and may have impeded their ability to follow the harsh prescriptions for inflationary periods (i. e. government budget surpluses), but that does not mean that in less sophisticated economies fiscal regulation of consumer demand might not stili be effective. Finally, if there are doubts as to the usefulness of fiscal policies in slowing existing inflation, there stili seems to be general agreement that government spending and tax programs can both initiate and accelerate inflation. Thus, the probablistic linkage between fiscal policy and inflation problems remains strong enough to keep this aspect of taxes firmly in mind.

Our concern here is with the Middle East. Any definition of this region is geographically arbitrary, and the one used here is no exception. Our focus is on the developing economies of southwestern Asia and northeastern Africa – from Libya to Iran and from Syria to the Sudan – a total of 16 countries with a population of about 145 million in the !ate 1970s. The total GNP of these countries was about $270 billion, averaging about $1850 per capita; the GNP per capita in individual countries ranged from less than $350 to more than $15 000.

The lslamic heritage of these countries, as we shall see below, has implications for their economies, especially for the role of taxes, that set them apart from the developed capitalist economies in which, and for which, most modern capitalist economic theory has been formulated. in particular, since the beginning of lslam more than 1400 years ago, it has embodied, at the very core of its theology, a fairly complex body of economic legislation and socio-economic guidelines. Taxes, or more properly the individual’s financial obligations toward the community at large, are prominent lslamic concerns; more so than in other religions. in a period marked by a strong religious revival within Dar al-Islam (literally, the House of lslam) from Senegal to lndonesia and from Iran to Nigeria, serious consideration must be given to how the Quran and other sources of lslamic tradition may influence policymakers in Muslim states.

Obviously not every country of Dar al-Islam is showing the new-found theological fervor of Colonel Qaddafi’s Libyan Arab People’s J umhuriyyah or Ayatollah Khomeini’s lslamic Republic of Iran. Nevertheless, the problem of economic and social dislocation, brought on in some countries by rapidly escalating oil wea!th or in others simply by a greater degree of cultural interaction with neighboring non-Muslim areas, has recently prompted many intellectual and political leaders to reexamine their lslamic heritage. (This is so even among those most strongly westernized by ed ucation and/ or long residence abroad.) Not surprisingly, in the forefront of the concerns of many such Muslims have been economic questions vital to the future development of their countries.

policy concerns: we must explore and summarize the more İmportant aspects of the İnteraction between Islamic theology and fiscal questions.

Our aim İn this book İs to evaluate the general role that tax policies have played İn the economic development of the Middle East since 1945 and also to advance some recommendations on how fiscal tools could be better used to promote further advancement İn this region.

ln Part il we will discuss the economic aspects of the major categories of taxes used İn most developing countries, including those of the Middle East. Our İntention İs not to write a textbook on this subject, since many good ones already exist; rather, the first part of this section (Chapters 2, 3 and 4) İs for the convenience of the reader whose training İs not İn economics and who İs primarily İnterested İn current government policies İn the Middle East, but who would otherwise have to refer regularly to a text on fiscal matters for basic definitions and for explanatory discussion of the questions covered İn the later sections of this work. The reader who İs already familiar with the basic literature on fiscal questions can proceed directly to Chapter 5 without İmpeding his understanding of the subsequent discussion.

The fifth chapter discusses specifically Islamic concerns with taxation. The chapters of the Quran contain explicit references to forms of taxation – one of these, zakat or almsgiving, can be alternatively defined as a wealth-based tax, and has traditionally been held to be one of the five central beliefs İn Islam: İn this chapter we will consider zakat İn some detail. We will also define and discuss other forms of Islamic taxation, such as ‘ushr ( or tithe), kharaj (levied on land by type of cultivation employed) and jizyah (poll tax).

in Part 111 we undertake, on a comparative basis, an analysis of the recent fiscal history of 16 Middle Eastern countries. The principal concern İn this section İs with a categorical breakdown of the tax profiles of these countries, on both a cross-sectional basis and with regard to changes that have occurred during the time period and for which data are available.

Thus, İn Chapter 7 we will consider as a group the oil-exporting economies of the region: Bahrain, Iran, lraq, Kuwait, Libya, Oman, Qatar, Saudi Arabia, and the United Arab Emirates (UAE). Oil production varies widely among them: Saudi Arabia, of course, İs the world’s largest oil exporter, while many counties İn the United States produce more oil every day than does Bahrain. During the period covered by this study, the major part of the revenue of the governments of these nine countries has been generated by fiscal returns on oil exports.

On the other hand, among the other seven countries whose tax histories are outlined İn Chapter 8 (Egypt, J ordan, Lebanon, Sudan, Syria, the Yemen Arab Republic and the Yemen People’s Democratic Republic) are some that are oil producers (Egypt and Syria), but there are none for which oil-generated tax revenues were significant during the approximately 30 years covered here.