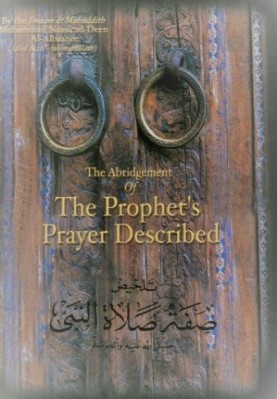 The Abridgement of the Prophet Prayer

Contents – The Abridgement of the Prophet Prayer

Introduction – The Abridgement of the Prophet Prayer

All praise is for Allaah. We praise Him, we seek His aid, and we ask for His forgiveness. We seek Allaah’s refuge from the evils of ourselves and from our evil actions. Whomsoever Allaah guides then none can misguide him, and whomsoever Allaah misguides then none can guide him. I testify that none has the right to be worshipped except Allaah, alone, having no partner, and I testify that Muhammad is His slave and His Messenger. To proceed:

Then it was suggested to me that I should undertake an abridgement of my book, Sifat Salaatin-Nabiyy � minat-Takbeer ilat-Tasleem Ka’annaka Taraahaa, “A Description of the Prophet’s � Prayer from the Takbeer to the Tasleem as if You Were Seeing It,” and that I should shorten it and rephrase it for it to be more accessible to the common people.

So I saw this to be a favorable suggestion, and it agreed with what I myself had felt for a long time. I had also frequently heard such advice from brothers and friends. So this encouraged me to allocate to it a small part of my time which is crowded with knowledge related work and research. So I hastened, as far as my ability and efforts allowed, to carry out the suggestion, whilst asking the Guardian Lord, the One free of all imperfections and the Most High, that He should make it an action done purely and sincerely for His Face, and that He should cause it to be of benefit to my brother Muslims.

In it I have quoted some extra points of benefit additional to what is to be found in Sifatus-Salaat. These were matters that came to my attention and I saw that it would be appropriate to mention them in the abridgement.

I also gave particular attention to explaining some phrases occurring  in  some  of  the  ahaadeeth  and the adhkaar (words of remembrance of Allaah). I also provided major headings for each section, and also sub-headings for further clarification. Under these I quoted the points under discussion, numbered consecutively. Alongside each issue I quoted the ruling: whether it is a pillar (rukn) or an obligation (waajib). As for those matters about which I remained silent and did not mention a ruling, then they are from the Sunan1, and some of them carry the possibility of being declared obligatory – however stating one or the other with certainty would conflict with what is befitting from scholarly research.

So the pillar (rukn) is that which is essential for completion of the affair that it falls within, being such that its absence necessitates that the action depending upon it is nullified. An example is the bowing (rukoo [01]1 Sunan: pl. of sunnah, referring here to recommended actions established from the practice of the Prophet * [Trans. Note]) in the Prayer – it is a pillar of it, and if it is absent then the Prayer is nullified.

The condition (shart) is like the pillar (rukn) except that it is something outside the action that is dependant upon it. An example is the ablution (wudoo) for the Prayer. Prayer is not correct without it.

The obligation (waajib) is that which has an established command in the Book or the Sunnah, but there is no proof that it is a pillar (rukn) or a condition (shart). One who carries it out is rewarded, and one who leaves it without valid excuse is punished. Just like it is the fard (obligation) and making a difference between the fard and the waajib is a newly invented use of terminology for which there is no proof.

The sunnah is an action of worship that the Prophet � continually performed, either always doing it or usually doing it, but which he did not command in a manner causing it to be an obligation. It is such that one who carries it out is rewarded, but one who leaves it out is not punished or blameworthy.

As for the hadeeth that some blind-followers mention and attribute to the Prophet �, “Whoever leaves my sunnah will not receive my intercession,” then there is no basis for it from Allaah’s Messenger

� and whatever is not established as his � saying, then it is not allowed to attribute it to him �, for fear of falsely attributing something to him. As he � said, “Whoever falsely quotes me as saying that which I have not said-then let him take his sitting place in the Hell-Fire.”

Then it goes without saying that in it, just as in the original work, I do not restrict myself to any particular madhhab from the four followed madhhabs. Rather in it I followed the way of the people of the hadeeth: those who adhere to acceptance of every hadeeth that is established from the Prophet �. Because of this fact their position is stronger than the madhhabs of those besides them, and this is something witnessed to by the fair-minded people of every madhhab. Amongst those witnessing to this was Abul-Hasanaat al- Luknawee al-Hanafee who said, “How could that not be the case when they are the true inheritors of the Prophet �, and are the true  representatives of his Religion. May Allaah raise us up amongst them, and cause us to die whilst having love for them and whilst following their way.”

And may Allaah have mercy upon Imaam Ahmad ibn Hanbal who said, ‘The Religion of Muhammad is the narrations (akhbaar)’ – what a fine means for the youth are the reports (aathaar). Do not turn away desiring other then the hadeeth and its people. For

opinion (ra’y) is night and the hadeeth is day. And perhaps a youth may be ignorant of where guidance lies whilst the sun has arisen and is shining brightly.’

he must immediately turn to the correct direction, and his Prayer will be correct.

PRAYER ON A SHIP OR AIRPLANE

them between his feet2. This order is authentically reported from the Prophet �.

PRAYING WHILST STANDING UPON THE PULPIT (MINBAR)

(16) It is allowed for the Imaam to pray upon an elevated place, such as the minbar – for the purpose of teaching the people. He stands upon it and says the takbeer3 and recites and bows upon it. Then he steps backwards in order to perform the prostrations on the ground at the foot of the pulpit. Then he can return to it a d do in the second rak’ah the same as that which he did in the first.

THE OBLIGATION OF PRAYING TOWARDS A SUTRAII

(BARRIER) AND OF BEING CLOSE TO IT

THE REQUIRED HEIGHT OF THE SUTRAH (BARRIER)

4 I say: We know from this that what the Muslims do in all mosques that I have seen in Syria and elsewhere with regard to praying in the middle of the mosque, far away from any wall or pillar, is nothing but negligence of the command and the practice of the Prophet *

5 Mu’khiratur-Rahl: It is the piece of wood placed at the back of the saddle, so the hadeeth contains an indication that it is not sufficient to use a line upon the ground. The hadeeth

that is not authentic.

THE FORBIDDANCE OF PRAYING TOWARDS GRAVES

THE FORBIDDANCE OF PASSING IN FRONT OF A PERSON WHO IS PRAYING9 EVEN IN THE SACRED MOSQUE IN MAKKAH (AL. MASJIDUL-HARAAM)

6 As for the hadeeth that he * prayed at the outer edge of the area for tawaaf without any sutrah and the people were passing in front of him, then this is not authentic.

Furthermore, it does not mention that they were passing between him and his place of prostration.

THE OBLIGATION OF PREVENTING ANYONE TRYING TO PASS IN FRONT OF YOU, EVEN IN THE SACRED MOSQUE IN MAKAAH

MOVING FORWARD TO PREVENT SOMEONE PASSING

THAT WHICH BREAKS / DISRUPTS THE PRAYER 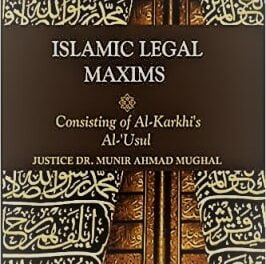 The Principles and Codes of law in Hanafi Fiqh pdf 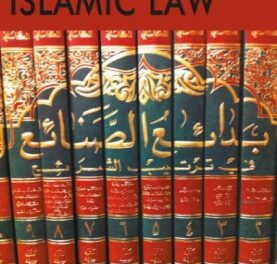