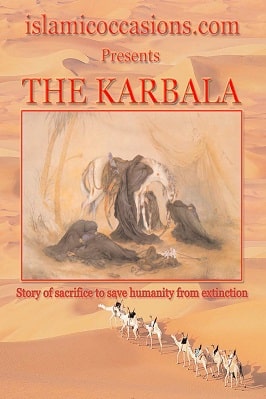 As the representative of his grandfather Prophet Muhammad (PBUH), Imam Hussain’s main concern was to safeguard and protect Islam and guide fellow Muslims. On the other hand, the staying power of the rulers (Muawiya and his son Yazid) depended solely on the might of the sword.

They used brute force to rule over the Muslim empire even by all possible illicit means.

The mission of Imam Hussain (PBUH) is distinctly a unique, political, and religious revolutionary movement in the history of the World. His was a tremendous undertaking that still reverberates throughout the Muslim nation.

He has been a propelling force and a seminal element in events throughout Islamic history, particularly in the sphere of Jihad (the holy struggle in the way of Almighty God).

Imam Hussain’s example has remained vividly alive for generations and centuries. His uprising, movement, and ideals still have a deep impact on the conscience and awareness of the Muslim empire.

The Holy Prophet (PBUH) is reported to have said: “The best of Jihad is that of a word of right spoken to an unjust ruler.”

Imam Hussain (PBUH) witnessed the deteriorating political and social situation and clearly recognized that the general policy of the authorities did not abide by Islamic principles. He was aware of the Ummah’s numerous and painful afflictions and was determined to exercise his religious duty, being the duly sanctioned leader & central figure capable of restoring Islamic values. Thus he rose.

His revolt is rich in lessons and divinely inspired attitudes. Imam Hussain (PBUH) embodied the sacrifice of self, money, family, social status, and the challenge to terror and cruelty. He patiently traversed hundreds of miles, moving both night and day.

The epic protest he engendered came at the most critical political juncture. In fact, the Prophet’s grandson had vowed to sacrifice himself.

Thus, Karbala proved to be a clash involving Islamic truths versus falsehood, belief versus disbelief, and the oppressed versus the oppressor, faith against brute force. Karbala was about standing in the face of oppression, regardless no matter the cost.

In Karbala, Imam Hussain the fifty-seven-year-old second grandson of Prophet Muhammad (PBUH), sacrificed his totality and all he had, for one goal.

This goal was to let the truth triumph over falsehood eventually, and he did that brilliantly.

His goal was to foil the plan that Muawiya had expertly developed for his son, Yazid, which was to establish a permanent Umayyads (Banu Umayya) rulership over the Muslim Ummah (even by sacrificing the Islamic principles), but doing it in the name of Islam.

Brilliantly, Imam Hussain (PBUH) succeeded in foiling this plan and he exposed the disreputable nature of Umayyads though this was at the expense of his life.

Eventually, he was martyred along with his sons, most of his household, and all of his companions. The bodies were mutilated and their heads were carried from Karbala to Kufa and finally Damascus.

His womenfolk were taken prisoners and marched across the desert. He himself was expecting all that but did not budge an inch.

An uprising led by the noblest and best-accepted personality in the entire Ummah is certainly one that is uniquely distinguished as a movement abounding with spiritual, moral, and religious ideals.

Due to the importance of this personality, we are honored to present this concise, well-documented book to our readers. Hereunder are related the most outstanding incidents of the dynamic Hussaini movement, which stands unequaled in its greatness and fills pages upon pages of history.

Such a sublime revolution has to be studied, dissected, and fully understood. Lessons should be drawn from it. Here we note that the backward and downtrodden nations must one day follow in the footsteps of Imam Hussain (PBUH) if they are to challenge the despots.

We beseech the Most High and Almighty God to make this volume of enduring benefit to our esteemed readers and to help us in disseminating benevolence and guidance. He is the Hearing and Answering. Wassalamu Alaikum Wa Rahmutallahi Wa Barkatahu

The Principles Of State And Government In Islam. Pdf download