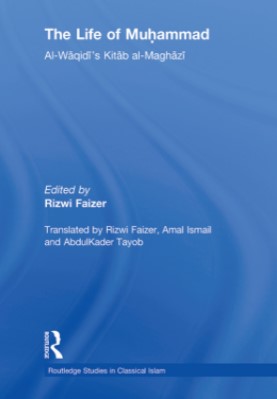 THE LIFE OF MUHAMMAD – Book

About the Book – THE LIFE OF MUHAMMAD

Rizwi Faizer brings this key text, translated into English for the ﬁrst time, to a new, English-speaking audience. It includes an “Introduction,” authored jointly by Rizwi Faizer and Andrew Rippin, and a carefully prepared index.

The book deals with the events of the Prophet’s life from the time of his emigration from Mecca to his death, and is generally considered to be biographical. Bringing together events in the Prophet’s life with appropriate passages of Qur ‘a¯ n in a considered sequence, the author presents an interpretation of Islam that existed in his times. It includes citations from the Qur ‘a¯ n, as well as poetry that appears to have been inspired by activities during his life. This English translation of a seminal text on the life of Muhammad is an invaluable

addition to the existing literature, and will be of great signi˙ﬁcance to students and scholars in the ﬁeld of Islamic studies, Islamic history, Medieval history and Arabic literature. Rizwi Faizer is an independent scholar, residing in Cornwall, Ontario, Canada. Having obtained her B.A. at the University of Peradeniya, Sri Lanka, she went on to work at the Asia Council for Law and Development in Colombo. In 1984 she obtained her M.A. at the University of New Brunswick, Fredricton, and University……

THOSE FROM THE QURAYSH AND THE ANSA¯ R WHO WITNESSED BADR

For those who were martyred in battle and those who fought, the Prophet assigned a portion for each in his absence; there were three hundred and thirteen men.

From the Banu¯ Ha¯ shim: Muhammad, the Messenger of God, the good and the blessed, Hamza b. Abd al-Mu˙ttalib, Alı¯ b. Abı¯ Ta¯ lib, Zayd b. Ha¯ ritha, Abu¯ MarthadK˙ anna¯ z b. Husayn al-Gha˙˙nawı¯ and Marthad b.˙Abı¯ Marthad, th˙e two allies of Hamza and Anasa t˙he ˙mawla¯ of the Prophet, Abu¯ Kabsha, the mawla¯ of the Prophet a˙nd Shuqra¯ n witnessed it. Shuqra¯ n was a slave of the Prophet, and nothing was apportioned to him.

His conduct was exemplary over the prisoners. All the men assigned to him were prisoners. Not a man among the people achieved more than what he did. It took eight to equal Shuqra¯ n.

Abd al- Azı¯z b. Muhammad related to me from Ja far b. Muhammad from his father that the Prophet appo˙rtioned a portion to Ja far b. Abı¯ Ta¯ lib˙as his reward. But our companions do not mention it and his name is not in the s˙ources.

From the Banu¯ Muttalib b. AbdMana¯ f: Ubayda b. al-Ha¯ rith b. Abd al-Muttalib b.

From˙˙ the Banu¯ AbdShams b. AbdMana¯ f: Uthma¯ n b. Aﬀa¯ n b. Abı¯ l- A¯ s b. Umayya b. AbdShams. He did not attend but stayed behind with the dau˙gh- ter of the Prophet, Ruqayya. The Prophet apportioned to him and rewarded him, and all the people mention it; Abu¯ Hudhayfa b. Utba b. Rabı¯ a, and Sa¯ lim the mawla¯ of

Abu¯ Hudhayfa. From their allies˙among the Banu¯ Ghanm b. Du¯ da¯ n: Abdullah b. Jahsh

Abu¯ Ma shar and Ibn Abı¯ Habı¯ba related to me about it from˙ Da¯ wud b. al-Husayn, who said: Abdullah b. Ja far al˙-Zuhrı¯ claimed that he was Arbid b. Humayra ˙an˙d that his kunya was Abu¯ Makhshı¯, and that he was from the Banu¯ Asad b.˙Khuzayma who were on their own. Some of our companions informed us that Subayh, the mawla¯ of al- A¯ s