The Militarization of the Persian Gulf pdf 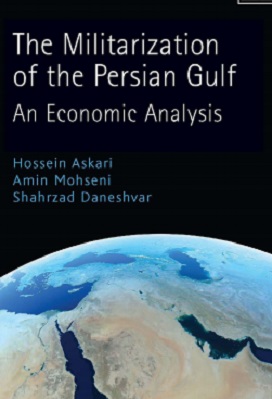 The Militarization of the Persian Gulf: An Economic Analysis

THE MILITARIZATION OF THE PERSIAN GULF – Book Sample

Introduction – THE MILITARIZATION OF THE PERSIAN GULF

Countries have acquired military weapons since the dawn of time. The broad reasons for military expenditures have been for self-defense, as deterrence against external aggression, and to wage war. However, in many cases, rulers have also used these weapons to suppress their own citizenry as a means to remain in power. While these and other reasons may be used to justify military expenditures, there are attendant economic and social costs.

Resources that could be used to enhance economic prosperity are wasted. Economic and social progress suffers. Moreover, military hardware that is acquired has the likelihood of being used to fuel conflict and wars, cause more economic destruction, and drain even more economic resources over time due to maintenance. Military expenditures, unless truly needed and effective for self-defense, are an impediment to economic and social progress for a country and a region.

Besides the direct and indirect deleterious implications of military expenditures for economic growth and development, vast military expenditures in Muslim countries broadly contradict fundamental Islamic teachings: (1) the pursuit of peace; (2) the achievement of economic prosperity and economic and social justice. While Islam requires the state to maintain social stability by promoting tolerance and opposition to all forms of extremism, it preaches peace through the coexistence of different races and religions. As such, Islam also advocates the peaceful resolution of differences.1

In Islam war is seen as an illness and one of the worst quali- ties of humankind.2 Similarly, the killing of innocent people and violence are antithetical to Islam. Conflicts are supposed to be resolved through dialogue and peaceful means, not through hostilities and war. Only peace and the pursuit of peace are the great achievements to be praised and rewarded. Thus, it is apparent that Muslim countries cannot justify vast military expenditures on religious grounds.

Islam also preaches the importance of economic prosperity and eco- nomic and social justice. Islam holds that positive intellectual and eco- nomic growth can occur once the community’s basic physiological needs for food, shelter, clothing, and rest are assured; safety, security, and social cohesion are maintained; and public freedom of speech and religion are guaranteed.

Islam has deemed the fulfillment of these essential needs, along with free and easy access to high-quality education, to be a prerequisite for the promotion of economic growth and social develop- ment.3 Poverty is considered by Islam to be a threat to the very existence of the faith.

Thus, specific capitalistic strategies that promote the maximization of efficiency and productivity must be modified if they leave the basic physiological and educational needs of a significant part of the populace unfulfilled, and hinder public access to equitable economic opportunities. Accordingly, it is difficult, if not impossible, to reconcile the siphoning of economic resources to finance vast military expenditures and conflicts with the pursuit of economic prosperity and economic and social justice.

SYNOPSIS OF MILITARY EXPENDITURES IN THE PERSIAN GULF

Military expenditures became significant in the Persian Gulf after the first dramatic rise in oil prices in 1973–74 and have remained large by any standard. Military spending in the Middle East—particularly in the Persian Gulf—surged with the onset of the Iran–Iraq War in 1980, with the most notable jumps in spending occurring in Iraq, Saudi Arabia, and the United Arab Emirates (UAE).

Because military expenditures are motivated by a number of factors, especially the military expenditures of perceived foes and pressures from arms suppliers, these expenditures will not be reduced unilaterally by countries but will require a concerted and sustained international effort. While the economic burden of military expenditures has been highly significant, it has been trumped by the economic cost of conflicts and wars. Oil revenues have provided a seemingly painless means of financing the most sophisticated weaponry avail- able. Even though the financing may appear painless, as taxes have not been used, the citizenry have in fact been negatively affected. Economic growth over most of 1975–2002 has been disappointing at best. Future generations will also suffer as finite oil and gas resources have been used to finance unproductive and destructive military expenditures.

In the 1970s, annual real per capita gross domestic product (GDP) growth in the Middle East and North Africa averaged 2.3 percent, exceeding that of developing countries as a group.4 In sharp contrast, however, between 1975 and 2002, real per capita GDP annual growth in the Middle East region stagnated to 0.1 percent, compared to average annual growth of 5.9 percent for the East Asia and Pacific region and 2.3 percent for all developing countries over the same period (see Chapter 8, Table 8.9).

During the 1980s and 1990s, the Middle East region’s overall weak growth performance primarily reflects the poor performance of the more populated oil-exporting countries (which overwhelm the regional average), whose economies have continued to remain heavily dependent on oil and are vulnerable to significant oil price fluctuations.

The Persian Gulf oil-exporting countries (as opposed to the Middle East and North Africa, as a region) show negative growth rates in real GDP per capita for all the countries under consideration for the period 1975–2002 (see Chapter 8, Table 8.9). By comparison, growth in the in-region non-oil countries (that is, excluding Persian Gulf oil exporters within the Middle East and North Africa) was positive, albeit not as high as that in our group of out-of-region countries and in the East Asia and Pacific region.

What is more striking is that the erosion of real GDP per capita incomes in the oil exporters is matched only by sub-Saharan Africa, despite vastly differing natural resource endowments and other country characteristics. Strikingly, for most of the major oil-exporting countries of the Persian Gulf the period when they experienced their highest level of per capita income was in the period 1975–1981, a time of high real oil prices5, whereas for other countries it was, as to be expected, in a recent year.

But with the ensuing downturn in oil prices beginning in the summer of 2008 and the expectation that the global economic downturn would linger for some time, the economic future for the vast majority of the population in the region again looked bleak in late 2008. Economic policies are largely designed to ensure the short-term survival of the regimes in power, as opposed to laying the foundations of sustained growth. Institutions are ineffective and weak; while govern- ments rely on oil revenues and use the proceeds to subsidize essential consumption for the population at large and to enrich those in power.

While numerous factors explain the poor economic performance of the Persian Gulf oil-exporting countries, military expenditures (and the wars and conflicts that they have fueled) are amongst the leading nega- tive factors. The Persian Gulf is, by some indicators, the most milita- rized region in the world.6 Public dissatisfaction with economic and social progress and the absence of elective legitimacy has led rulers and governments to rely on force to maintain power.

In this volume, we will explore the size, the dimension and the extent of mil- itary expenditures in the Persian Gulf region, with numerous comparisons to other regions, and explore the economic ramifications. In Chapter 2, we begin with an examination of the reasons motivating military expenditures and their economic and social effects.