The Politics of Written Language in the Arab World pdf 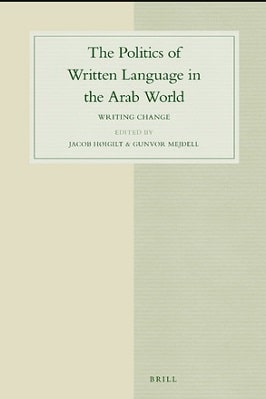 THE POLITICS OF WRITTEN LANGUAGE IN THE ARAB WORLD

Arabs engage in writing and reading as never before, whether on screen or on paper.

As more and more ‘ordinary’ people take possession of the written language, questions arise about what this process does to the Arabic language system, which is characterized by ‘diglossia’, and if and how writing practices are implicated in social and political relations in the Arab world.

The essays in this book all address these questions. They are the result of a research project –Language Change in the Arab World – that has gathered sociolinguists in three workshops to explore the extent and implications of mass writing in Arabic.1

In particular, we have focused on the emergent trend of writing in the vernacular variety in Egypt and Morocco, two of the most populous Arab countries (88 and 33 million inhabitants, respectively).

Contemporary mass writing in Arabic is undoubtedly connected to the marked increase in literacy across the Arab world as well as the rise of digital technology. Upwards of 3.5 million 15 to 24-year-olds were illiterate in Egypt in 1975, but today, the figure has sunk to about one million, while the population has grown quickly in the same period.

While mass literacy has provided people with the means of writing, the explosive increase in social media usage has provided the opportunity.

Ordinary people produce an enormous amount of writing each day on Facebook, Twitter, blogs and in comment fields of various new outlets across the Arab world. More traditional forms of writing have also blossomed, however, both in the digital and the analog domains. Online, the experiment Wikipedia Maṣrī has been going on since 2008.

A subsidiary of the Wikipedia family, this is an electronic encyclopedia written in the Egyptian dialect. It currently (January 2017) contains 16,211 entries.2 Also newspapers, magazines and books proliferate to a degree never seen before in many Arab countries.

The mushrooming of newspapers, publishing houses and literary works in Egypt following the Egyptian revolution in 2011 was an accentuation of an already existing trend.