Home » The Prospects of Political Islam in a Troubled Region pdf

The Prospects of Political Islam in a Troubled Region pdf 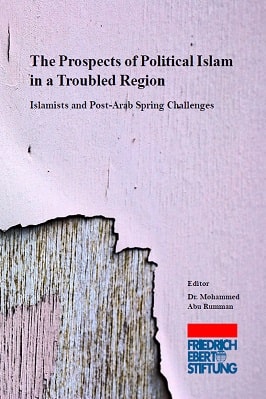 The Prospects of Political Islam in a Troubled Region – Islamists and Post-Arab Spring Challenges by Dr. Mohammed Abu Rumman

THE PROSPECTS OF POLITICAL ISLAM IN A TROUBLED REGION

Whether in positions of power, parliamentary seats, peaceful legal opposition, or outside the rules of the political game, Islamist movements are an important and leading player in Arab politics and society.

Yet from its very first moments in 2011 “since the outbreak of revolution in Egypt, Tunisia, and Yemen”, and on through its subsequent stages “the Syrian and Libyan revolutions”, the Arab Spring has re-shaped the roles of these movements and created new trends, and political, social, and cultural environments altogether different from anything with which Islamists had previously dealt.

In the first phase of the Arab Spring, Islamists came to positions of power through elections, entering parliaments and later forming governments in Tunisia and Morocco. Then, after obtaining an overwhelming majority in parliament, they gained control of the presidency in Egypt.

With international and western communities no longer fearful of political Islam as in previous decades, and with global attempts to test them in the future as ruling powers in the Arab world, it seemed as if the “era of political Islam” had finally arrived.

But by 2013, things began to change, the Muslim Brothers fell in Egypt and returned to prisons, out-law status and confrontation with the state, Syria, Yemen, and Libya descended into civil war and internal militarism, and militant Islam drew new breath in the form of a hybrid entity that surpassed even al-Qaeda in its extremism and radicalism and succeeded in establishing a state in the name of Islam and a Caliphate stretching from Iraq to Syria, reshaping agendas, priorities, interests and international and regional positions towards the Arab region.

Despite taking center stage, Islamists in the Arab Maghreb, with the exception of Libya, survived scenarios of internal wars and maintained a relatively democratic transition by partnering with other forces in Tunisia, understanding the rules of the game alongside the Makhzen in Morocco, and avoiding a return to violence in Algeria.

These changes, reflected in the various trends that exist within the spectrum of political Islam, and their various ideological, dynamic and political ramifications, have imposed significant and fundamental questions on political Islam, its prospects, its predicament, and its future.

In fact, these questions did not stop at the limits of the internal equations, structure, role, or ideologies of Islamist movements.

In general, local and regional factors have become intertwined, and with internal and civil wars, proxy wars, the rise of sectarian, ethnic, and religious identities, the ambiguous agendas of political Islam, Sunni and Shia sectarian and religious tendencies, Russian intervention, and the United States’ declining role in the region, we have entered into new stages in the Arab Mashreq.1

On the one hand, we are faced with a storm passing through the Arab region, and on the other, Islamist movements undergoing major multi-level changes. Similarly, we are not faced with an analysis confined to the internal equations of Arab states but a mixing of overlapping regional and international factors.

This book, which seeks to deconstruct the growing pains experienced by Islamist movements, and indeed their effects, is the outcome of a regional conference held by Friedrich-Ebert-Stiftung/Amman “on May 23, 2017, at the Crowne Plaza Hotel” in which experts, researchers, and specialists in Islamist movements, from nine Arab countries, as well as several well-known Western researchers participated.

The aim of the conference was to examine the state of Islamist movements, as well as the crises, indicators and trends related to their future.

To that end, and after extensive discussion at the Friedrich-Ebert-Stiftung Office/Amman, a process of dividing the conference’s themes, discussions and working papers was organized in accordance with the nature of the political circumstances and specific situations of each country. It was then agreed to divide the themes as follows: