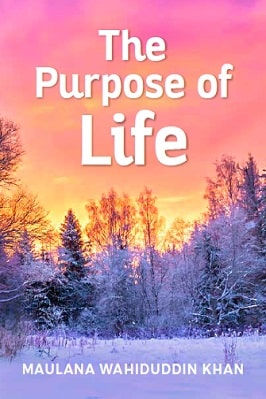 THE PURPOSE OF LIFE

THE PURPOSE OF LIFE

If some being from outer space were to traverse the universe in a spaceship and land on the planet earth, he would be dumbfounded at the uniqueness of what he saw, namely, human beings and many other forms of life.

For the earth, in sustaining these life forms, is the outstanding exception amongst all the stellar bodies which are scattered throughout the immensity of the cosmos.

Amongst the myriad stars, in the vastness of space, there are certainly a number of other planets in existence, and, like the earth, they are constantly revolving around their suns in their many respective galaxies, but on their gaseous or dry rocky surfaces there is no trace of life as we know it.

If, indeed, there is life on this earth, it is only because of the life-sustaining things that are found in abundance everywhere, i.e. all those prolife factors which add up to the human life support system.

Those who are born on this planet earth and live their entire lives here do not realize the astonishing singularity of nature. The reason is that, having seen the earth since childhood, day in and day out, they have become habituated to its many features.

Thus, they fail to notice how exceptional are their physical surroundings. Had it not been so, every morning, they would cry out: “Oh! what a beautiful earth, what a perfect world!”

The unique nature of the life-giving aspect of the planet earth has existed since time immemorial, but it is only in modern times that scientific discoveries have made this fact common knowledge. The man of today appreciates to a far greater extent than ever before the very special nature of the earth’s life support system.

What is this life support system? It is a gift which has been given to man by a Giver.

In such a situation it is essential that man should strive to recognize his Benefactor, acknowledge the Giver of this gift and submit to Him wholeheartedly. And, having done his best to understand why the Giver has bestowed this unique gift upon him, he should lead his life in accordance with the will of the Giver.

But this does not happen.

Man, in leading his life in this world, tries to build a bright future for himself and his children and ultimately builds a civilization for himself. But it never occurs to him that he should attempt to find out who has created the unique system which sustains his life or what its Maker wants from human beings.

Moreover, he has no clear appreciation of the fact that everything in this world has: its right use and its wrong use.

The same is true of nature’s life support system in that it may be looked at from two different angles, a right one and a wrong one.

Now the question arises as to how to determine which are the right and wrong angles with respect to the life support system.

The Creation Plan regarding life, which we have been told of by God through His prophets, is that the Creator has created man as an eternal creature, with the first brief span of his life in the pre-death period and the rest of his life — a much longer period — in the post-death period.

The pre[1]death period is that of trial and the post-death period The Purpose of Life 8 is that of reward or punishment, in accordance with how well or badly man has acquitted himself during the period of trial.

When human history has run its course, it will terminate with the Day of Judgement. The happenings on that day will be on an epic scale.

Then the Creator of man will manifest Himself in order to mete out rewards or punishments commensurate with the record of human deeds on earth.

Avicenna and His Heritage: Acts of the International Colloquium pdf download