The Religious and Moral Doctrine of Jihaad pdf 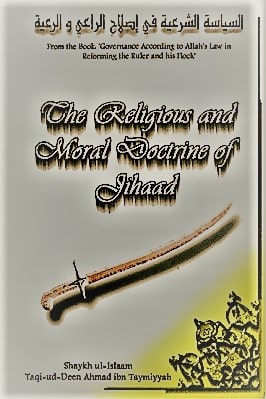 The religious and moral doctrine of Jihaad

THE RELIGIOUS AND MORAL DOCTRINE OF JIHAAD

Ibn Taymiyyah in Jihaad Against the Tartars

Ibn Taymiyyah’s most significant achievement in his life was his Jihaad against the Tartars after he unmasked the corruptions in their beliefs and their deceptive claims of embracing Islaam.

At that time, the Tartars were the greatest danger facing the whole Muslim nation. They had the largest military power and the most terrible warfare.

He was not satisfied with addressing the princes and leaders only, but he also addressed the public and gave fatwas (religious verdict) necessitating the defending of Islaam against its enemy, the Tartars.

He held that the protection of Islaam should be the primary objective of all Muslims and the condition to complete their faith.

His first letter of Jihaad that was addressed to the public stated the following:

“After Bismillah ar-Rahman ar-Raheem , To whom ever this reaches from the faithful and the Muslims, may Allaah have mercy upon them in this life and the Hereafter.

We praise Allaah Almighty on your behalf, the One and Only God, the All-Capable.”

He then started his letter by classifying the kuffar into a number of categories. He said that the first group of kuffar are the original kuffars , e.g. the Christians, Armenians, and the like.

With this group, it is permissible to hold peace agreements with, eat from their food (that has been slaughtered by them), marry from their women, can be released if they fell as fell as prisoners of war, and their women are not to be killed unless they were fighting.

The second group consists of murtaddoon (apostates) who return to their infidel ways, like some Arab tribes, Persians, and Romans. These murtaddoon are worse than the original kuffar.

Therefore, fighting them is obligatory if they do not return to Islaam and no peace agreement nor covenant of security can be given to them. Their prisoners are not to be released, their food is not to be eaten, the Muslim man can not marry their women, and they are all to be fought and killed.

The third group consists of those who claim to belong to Islaam, but do not perform the Islaamic duties and practices, such as salaah, zakaah, hajj, nor do they carry out Jihaad or take jiziyah (tributes) from the People of the Book and the Sabbians, nor do they cease from killing Muslims and taking their money.

This group, under the consensus opinion of Muslims, must be fought in the same way that Abu Bakr as- Sideeq fought the people who refused to pay zakat.

Some of them are worse than kuffaar, even if they prayed and fasted such as the khawaarij who Ali fought and the Prophet foretold about them: “they are the most evil of people amongst Allaah’s creation.” And non of the companions or their successors disagree about the necessity to fighting them.

As for the fourth group, they are the most evil of all the groups. They are a group that rejected Islaam while still claiming to belong to it.

They are infidels, who reverted from Islaam because they entered Islaam without following its Shari’ah.

It is agreed upon, that they should be fought totally until they return to practice the fundamentals of Islaam and to prevent fitnah so that the religion (worship) will all be

👉 Click to load all books of Aqeedah  Ethics and Virtues