THE RULING ON MEAT SLAUGHTERED IN THE WEST pdf download 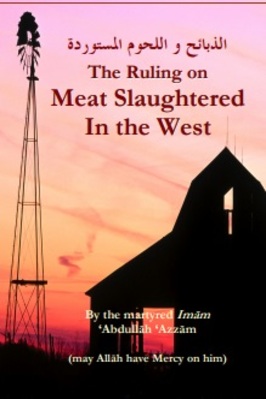 The Ruling on Meat Slaughtered in the West

THE RULING ON MEAT SLAUGHTERED IN THE WEST

This is a treatise that I had written a few years ago at the start of my frequent visits to the West – especially America – to attend student conferences organized by the Muslim Arab Youth Association (MAYA) that have been held until this year,2

and it is an annual conference that takes place during Christmas, which falls at the end of each Gregorian year. MAYA was the precursor to many Islāmic organizations, and the Muslim Youth Association in America was formed from the Muslim Student Association (MSA), which initially was composed of just thirteen students in Chicago.

And this issue has concerned me on my travels, and I exhausted myself in investigating it.

If there is anything I could forget, I could never forget my visit to Spain as I was making my way around Grenada and Cordova, as the Islāmic awakening there had not yet led to any viable communities forming that could operate their own markets and shops, especially those for halāl foods and meats.

So, I would spend most of my trip eating roasted pistachios.

I dug deeply into this issue – and it deserves to be dug into deeply – as the West has its own system of life.