The Shrines of the Alids in Medieval Syria Sunnis pdf 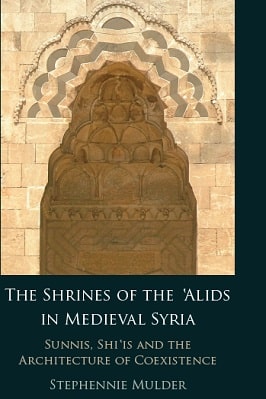 The Shrines of the Alids in Medieval Syria Sunnis, Shi’is and the Architecture of Coexistence Stephennie Mulder

THE SHRINES OF THE ALIDS IN MEDIEVAL SYRIA SUNNIS

‘A Road for All Muslims’

It was Damascus, around the year ad 1238, and a bitter con- troversy had erupted between Sunnis and Shi’is over the shrine of a saintly figure – a certain Malika, said to be a descendant of the Prophet Muhammad – located at the gate of Bab Jayrun. Apparently, like many holy places in this period, the shrine had been ‘rediscovered’ by someone who had a vision in which he learned this was the long-lost site of her grave.1

In an outpouring of devotion, the Shi’i inhabitants of the city began enthusiastically to build a shrine to commemorate the holy figure.

The shrine quickly outgrew the narrow space afforded by the passageway of the gate.

Nevertheless, a decision was made to block the gate and continue with construction. Not everyone was so enamoured of the plan, though. The contemporary Sunni historian Abu Shama (d. 1268), for example, was furious:

(This gate was) a road, which was already too narrow for its traveller! (Now,) the narrowness and tightness has been multi- plied on those who come and go.

May God multiply (instead) the punishment of (the Shi’is) and enumerate the recompense of those who aid in (the shrine’s) destruction and the removal of this hazard, following the Sunna of the Prophet in destroying the Masjid al-Dirar, erected by the infidels for his enemies!2

This was indeed a harsh chastisement.3 The Masjid al-Dirar was a pseudo-mosque built by the Prophet’s enemies to deceive the early Muslims. The Prophet had ordered its destruction personally.4

To compare the shrine at the Bab Jayrun with the Masjid al-Dirar was to utterly deny its legitimacy and to equate the actions of the Shi’is with those of the enemies of Islam.

But despite such protestations, the shrine persisted in one form or another for several centuries, and even the Mamluk Sultan al-Ashraf Qaytbay’s (r. 1468–96) direct intervention could not deter attempts to eliminate it.

Attempting to resolve the dispute, which was apparently still ongoing by the mid-sixteenth century, the Sunni historian Muhammad Ibn Tulun did not mince words:

The Shi’is (al-†å’ifa al-råfi∂a) and those ignoramuses who follow them, may God punish them many times over, allege it (is her burial place).

That is one of the greatest lies. It is a road, for (all) Muslims! Nobody who possesses even a tiny bit of intelligence and faith doubts it. I replied . . . so that the truth may be known about that and so the words of every misguided and damned person (who comes along) is not adhered to . . .5

And yet, despite Ibn Tulun’s outrage, the shrine, with its apparently specious origins, continued to be venerated for some time thereafter. That it was suggests that it was not only the city’s small Shi’i minority who supported its perpetuation, for Damascus was, and remains, a strongly Sunni city.

This study explores the unspoken subtext woven deeply within the supporting structure of the preceding story.

Namely, it argues that throughout Islamic history, but particularly in the period between the eleventh and the thirteenth centuries in Syria, the shrines of the ‘Alids –

the descendants of the Prophet Muhammad through his cousin and son-in-law ‘Ali – repeatedly became objects of patronage by both Sunni and Shi’i elites, and that this process created a newly unifying, and distinctly Islamic, sacred landscape.

In each case, shrines that have been perceived or assumed to be primarily ‘Shi’i’ spaces turn out to have been founded, or later reconfigured, by Sunni elite figures to be shared, pan-Islamic and inclusive.

To that end, what is striking about the story of the shrine at Bab Jayrun is not the expectedness of such disputes among Sunnis and Shi’is, but rather that it is a notably unusual story:

in fact, it is a rare example of open controversy between Sunnis and Shi’is regarding the burial place of a member of the ahl al-bayt, or Family of the Prophet.

Although sectarian controversies around the shrines did occur – and some are hinted at by various indications of scepticism given by the medieval authors who list the shrines – the most salient attribute of the medieval Islamic cult of saints is not its controversial nature, but its remarkably ecumenical one.

Furthermore, expressions of scepticism recorded by some medieval authors are probably reflective more of differences between the learned classes (‘ulamå‘), who form the majority of the authors of our textual sources (and who would have been far more cautious in according authenticity to sites) – and ordinary people, who generally lacked the ability to verify their authenticity or were uninterested in doing so.

Only infrequently do such controversies take on a sectarian character. And when they do, it is often tied to some other issue and only subsequently cast in sectarian terms:

as was the case with the shrine at Bab Jayrun, which, like many other shrines that arose in this period, may perhaps have escaped controversy altogether had it not blocked a vital route through the city.6

Indeed, expressions of caution about the authenticity of some locales in our sources are probably to be read as evidence of how beloved and heavily visited such sites were in actual practice, for if they were not, there would be no need for the learned to caution against their ‘erroneous’ visitation.

In large part, shared reverence for the shrines of the ‘Alids seems to have been a point of commonality between medieval Muslims that has few parallels elsewhere in Islamic social and sectarian history.

This non-sectarian veneration of the ‘Alids was present from at least the ninth century,7 but it became a major phenomenon at a time of great religious excitement in the Islamic lands: a period spanning the eleventh to thirteenth centuries ad and encompassing the dynasties of the Seljuks, Zangids, Ayyubids and Mamluks in Syria. ‘Syria’ is here conceived as the Islamic geographers conceived it:

referred to by them as ‘Bilad al-Sham’, it included roughly the area from the Euphrates in the north and east to the Mediterranean in the west and the deserts that today mark the border with Jordan (or Saudi Arabia) in the south: the geographical area that is sometimes called the Levant. Thus, medieval al-Sham was a contiguous geographical entity that included the modern states of Syria, Lebanon, Palestine and Israel.

For the sake of clarity and because the term is more well- known, this book uses ‘Syria’ instead of al-Sham, however the term is used with the caveat that it is the greater geographic designation that is meant.

Shrine visitation in this era was widely practised across all elements  of  medieval  Islamic  society,  and  the  frequent  performance of  devotional  activities  was  central  to  pious,  religious  and  social interaction in the medieval Islamic lands.8

Despite some sanctions against  shrine  visitation  in  the  Mamluk  era  (which  nevertheless appear to have been widely disregarded), there is no evidence that this  was  an  issue  of  real  concern  in  Seljuk  and  Ayyubid  times.9

Furthermore, this religious climate was one in which several streams of official and popular religious revivalism, reactionism and renewal converged: the Crusades motivated claims for the resacralisation of the land for Islam,10

a movement for the revival of Sunnism (i˙yå’ al-sunna) begun under the Seljuks provoked an awareness of sectarian issues and a popular atmosphere of religious excitement that was the defining characteristic of the period, and the political claims of new, unstable and competing regimes in need of social and political  legitimisation  facilitated  a  commitment  to  pious  architectural construction  on  the  official  level  in  Syria  that  was  often  elicited, mirrored  and/or  imitated  by  ordinary  citizens.

This was  an  era  of great  religious  effervescence,  in  which  hundreds  of  new  religious buildings of all stripes were founded and endowed, and in which it was perfectly ordinary for large crowds to stay the night in mosques in anticipation of seeing a particularly beloved preacher.11

On the popular level, this excitement played a crucial role in the generation of a new landscape of sacred sites throughout Syria, for in these three centuries hundreds of new shrines were rediscovered, constructed and venerated.

The broader geographic designation discussed above is important because it is precisely in this period, against the backdrop of these social and political events, that Syria’s holiness was consciously and systematically inscribed upon the land, and that the boundaries of that landscape were defined.

Along with the patronage of hundreds of new mosques, madrasas and khanqas (Sufi lodges) by the elite, the main engine for the generation of this landscape was the rediscovery and resanctification of sites of pilgrimage, in large part by ordinary people, and devoted to a truly astonishing number of holy figures.

And accompanying their rediscovery was the invention or expansion of a literature to describe, categorise, hierarchise and commemorate the holy sites.

That literature consisted of local chronicles, biographical dictionaries, historical topographies, pilgrimage guides and fa∂å’il treatises (works on the merits of a locality), among others.

Syria, land of the ancient monotheistic prophets, home of the sacred city of Jerusalem, had always been considered by Muslims to be a ‘holy land’ but, as recent research by Zayde Antrim has shown, this definition was not fixed, and it evolved over time and in response to the changing political mandate of the various ruling powers.

According to Antrim, in the 6th/12th and 7th/13th centuries representations of the cities of Jerusalem and Damascus, and later Aleppo, proliferated.

These city-centric representations gradually gave way to represen- tations of Syria as a coherent region by the late 7th/13th century. In the first half of the 8th/14th century, however, representations of the Mamluk Empire as a revived Dar al-Islam, or ‘Abode of Islam’, within which the region of Syria was subsumed, began to dominate the discourse of place . . . These shifts in discourse paralleled the political history of the period.12

Thus, in the Zangid period, representations were city-centric; in the Nurid and Ayyubid period, they became somewhat broader for all Syria; and in the Mamluk period they included Syria, Egypt and the Jazira (Mesopotamia).

Antrim’s analysis focuses largely on the impetus for political legitimisation provided by this body of literature, but she also notes there were other factors that may have led ordinary people, as well, to throw themselves, their wealth and sometimes the work of their own hands into the building and establishment of this landscape.

One of these, as noted above and examined in Chapter 5, may have been a newly urgent sense of the land as holy, brought about by the incursion of Crusader forces at the end of the eleventh century, which perhaps fuelled a desire to ‘claim the land for Islam’ – or perhaps simply generated a heightened awareness of, and sensitivity to, the holiness of the local geography.13

Furthermore, the Crusades spelled the downfall of many formerly revered sites, as it was common practice to pillage the holy places of