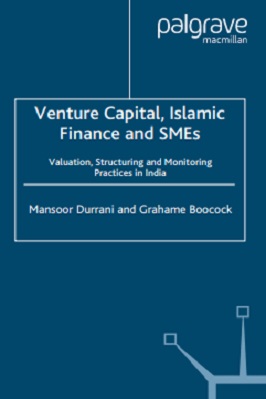 The book covers two broad areas, the small and medium-sized enterprises (SMEs) sector and the operation of the venture capital (VC) industry, and a third strand examines the potential role of Islamic VC. These topics are considered in the context of India, a nation of many contrasts and enormous economic potential.

The book is underpinned by a major study of the VC sector in India. The survey was conducted in the early part of the new Millennium, and the data were supplemented by ongoing dialogue with the VC community in that country. The authors also draw upon a comprehensive literature review, as well as secondary data and information from specialist research institutions and the ﬁnancial media. The material should be of interest to ﬁnance practitioners, policy makers, entrepreneurs and academics.

The structure of the book is now set out brieﬂy. Chapters 2 and 3 describe the contribution and operations of SMEs. The SME sector pro- vides many economic and social beneﬁts, and its contribution is ever more important in an era of rapid technological change. However, it is a misconception to see smaller ﬁrms as scaled down versions of their larger counterparts. The sector is characterized by heterogeneity. SMEs face constraints that stem from their size in relation to other market participants. Within the population of small ﬁrms, it is acknowledged that only a minority will be ‘star performers’. Firms in this category have usually managed to secure external capital hence the characteristics of the ﬁnancial markets available to small ﬁrms are examined. This encompasses the banking sector, as well as a more general assessment of ‘equity gaps’ affecting SMEs across the world.

The growth and development of many smaller enterprises is con- strained by a lack or resources hence it choose to assist SMEs. However, the diversity of growth patterns for SMEs, and the variety of barriers faced by such ﬁrms, present problems in providing customized assistance for smaller enterprises within a coherent framework of support.

Chapter 4 introduces the concept of VC and traces its history. In modern times, VC was associated ﬁrst with equity investments in the high-technology sphere. Nowadays, the VC industry covers a host of institutions, and venture capitalists differ in their approach to deal size and sector focus. The formal VC sector (the most high proﬁle within the industry) has switched focus from start-up deals to larger, later-stage investments. A vibrant VC industry supports ﬁrms that contribute signiﬁcantly to wealth creation; venture capitalists provide ‘capital and consultancy’. There has been a massive expansion of VC activity from its US base, and the book outlines how governments across the globe have taken steps to encourage the growth of an indigenous VC industry.

Chapter 5 describes the VC investment process as a series of distinct stages then explores the theoretical foundations of VC ﬁnancing. The key theme is agency theory, with most VC models examining the rela- tionship between VC ﬁrm and entrepreneur(s) from the principal-agent perspective. The principal focus for past research studies has been the appraisal criteria adopted by venture capitalists. We concentrate on the valuation, structuring and monitoring of VC deals. These methods of risk mitigation are under-researched areas, and this book ﬁlls a gap in existing knowledge, especially for emerging economies.

Chapter 6 presents an overview of Indian economy to set the research programme in context. This fascinating nation has a popu- lation of around one billion people, and a land mass of around 3.3m kilometres (over 13 times the size of the UK). The largest cities are Mumbai (formerly Bombay), with 12.6m inhabitants, Kolkata (Calcutta), 11m, New Delhi, 8.4m, and Chennai (Madras), 5.4m. The urban population has expanded steadily since 1960 but over half of the population still lives in villages with fewer than 5,000 people in them, and they depend upon agriculture for a living. The con- trasts between rich and poor, urban and rural, modern and traditional, agriculture and IT, and so on have to be borne in mind when considering the economic and ﬁnancial systems of the nation.

The banking system in India has been subject to a modest pro- gramme of reform but Government ownership and control of the largest banking organizations have exacerbated longstanding market imperfections. The nation’s capital markets have achieved global standards in trading infrastructure yet offer few opportunities for SMEs to raise capital. The Indian Government has long valued the contribution of SMEs, and Indians have never lacked the spirit of entrepreneurship. The presence of funding gaps has led the authorities to offer preferen- tial ﬁnancing for SMEs, and ﬁrms are directed to appropriate funding bodies through a large network of business support agencies. However, this ofﬁcial support system is not noted for its effectiveness and there is also a striking anomaly at the heart of the Government’s assistance for small ﬁrms.

The VC industry has operated since the mid-1980s. Its development and current activity is described. The authors suggest that the VC sector in India will, over time, play an even more prominent role in the ﬁnancial spectrum, especially if the nation secures its status as a global economic powerhouse. Nevertheless, the authors also highlight areas to be addressed before the VC market can fulﬁl its maximum potential.

Chapter 7 applies the issues identiﬁed in the VC literature to the Indian context to formulate a series of research questions in three under-researched areas. The authors investigate a number of proposi- tions, eight in all, covering the valuation, structuring and monitoring of deals. The conclusions are based on the most comprehensive study ever carried out on the VC industry in India. The main research instrument is a questionnaire-based empirical survey.

In Chapter 8, the research ﬁndings are presented. The effort and resources required to gather this data should not be underestimated. Barry (1994) states that: ‘Empirical research in venture capital is not easy. There are few tapes to spin. Because of that difﬁculty, comparatively little has been done, and the opportunity to develop results that are novel and important is great’. These comments are especially appo- site in a developing nation like India. The high response rate enabled the authors to conduct basic statistical analysis on the data gathered and then to divide the sample on the basis of demographic factors; this approach allowed the authors to utilize more advanced statistical tech- niques (including cluster analysis and logistical regression) to present a more detailed picture of the operations of different elements of the VC sector.

In Chapter 9, Durrani discusses how business relationships built on a framework of trust and fairness could reduce agency problems and hence the need for corporate governance. This analysis is set in the context of the principles of the Islamic faith. Durrani demonstrates the striking similarities between contemporary venture capital and Islamic Finance, a funding alternative that is growing rapidly throughout the Muslim world.

He argues that it is possible to adapt existing Islamic ﬁnancing structures to VC, and that practitioners in this new ﬁeld should be able to apply almost all of the conventional valuation, structuring and monitoring techniques.

The conclusions and implications of the research programme are presented in Chapter 10. Taken as a whole, the ﬁndings of our research programme, our analysis of the literature and the experience of other countries have a number of implications for policy makers, SMEs/ entrepreneurs, VC practitioners, those involved with Islamic ﬁnance and academics.

The ﬁndings are expected to trigger further interest in academic research on the Indian VC industry. We also put forward a series of recommendations for consideration by the authorities in India; these proposals should have relevance for other developing countries.