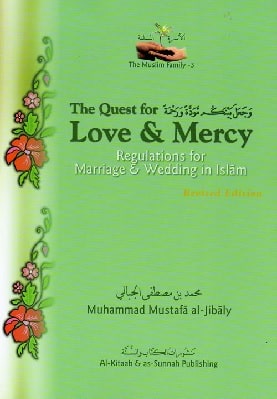 This book was written by Muhammad Mustafa al-Jibaly. It tries to provide a comprehensive account regarding marriage and weddings in Islam as it is detailed in the contents of the book listed below. The unique thing about this book is in its easiness to grasp points clearly and quickly. al-Jibaly also have another book concerning Islamic marriage which is called Closer than a garment. He further explains the concept of marriage life in Islamic perspective in that book. The main difference between these two as you will notice is that, in the Quest for love and mercy, the writer puts more emphasis on activities prior to marriage while in the Closer than garment book the writer puts more emphasis on after marriage life.

CONTENTS OF QUEST FOR LOVE AND MERCY BOOK

Allah created our world and the laws that govern it. Among Allah’s laws is that we need food to survive, air to breathe, rain for vegetation, and so on. One of Allah’s important laws is that things are created in pairs; from these pairs, reproduction occurs. Allah says:

This applies to human beings who are made of male-female pairs as well. Humru1kind started with our father, Adam, and our mother, Hawwa’ (Eve). From that pair, Allah (􀀌) created all of the other people, as He (􀁋) says:

«0 people! Revere your Lord who has created you from a single soul, created from it its mate, and dispersed from both of them many men and women.»al-Nisā ((4:1))

From the above discussion, we can conclude that marriage has many advantages to the society as a whole. In what follows we list a number of them.

Marriage fulfills Allah’s law for the reproduction, as we have discussed earlier. Thus H constitutes a correct means of preserving humankind until Allah inherits the Earth and all what is on it.

Contrary to zina, marriage preserves and reveres the kinship ties. It establishes the paternal relationships between the children and their parents, giving them all a feeling of dignity and self-esteem. That strengthens the feelings of love and care within the society.

Marriage is the proper way to establishing correct and permissible relationships between men and women. This helps maintain chastity, and protects the Muslim individuals from slipping into the filth of zina and other sins related to it (which will be fully discussed in a subsequent chapter). Thus, marriage closes the door in the face of many acts of moral degeneracy and decadence, which are among the major causes for the destruction of societies.